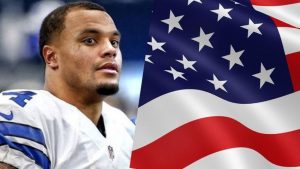 How is America’s Team, the Dallas Cowboys, responding to the current trend of professional athletes kneeling during the national anthem?

Sports Day reported a few weeks ago that while protests of the national anthem continue to pick up steam, Cowboys quarterback Dak Prescott says he will not be joining the ranks of those kneeling.

“I mean, it’s bigger than I think some of us think,” he said. “It’s just important for me to go out there, hand over my heart, represent our country and just be thankful and not take anything I’ve been given and my freedom for granted.”

Last week, Cowboys owner Jerry Jones said that he his “strongly” against the idea of protesting the national anthem. 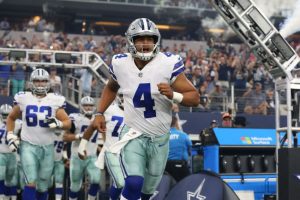 “I just feel so strongly that the act of recognizing the flag is a salute to our country and all of the people that have sacrificed so that we can have the liberties we have,” Jones said on 105.3 The Fan. “I feel very strongly that everyone should save that moment for the recognition of the flag in a positive way, so I like the way the Cowboys do it.”

But Cowboys running back Darren McFadden told NBC Sports’ Newy Scruggs that Jones has never ordered the team to act a certain way during the anthem.

“He hasn’t come in and said that to us personally,” McFadden said.

Earlier this month, Cowboys coach Jason Garrett also commented on anthem protests, saying, “There’s no question in my mind. The national anthem is sacred. The flag is sacred. And our team has demonstrated that.”

“The Cowboys receiver wants everyone to know he’s not critical of players who choose to protest by refusing to stand for the anthem. At the same time, Bryant doesn’t want to be judged for his choice to stand or be labeled as an athlete who doesn’t care about social issues.

He swears he does. In Bryant’s words, this is about following a more positive path that he’s convinced is the only way to arrive at “real peace.”

“I’m not criticizing nobody,” Bryant said of the growing number of NFL players who don’t stand for the national anthem. “They’re free to do whatever they want. Hell no, I’m not doing none of that. Their beliefs are their beliefs, and I’m not saying they’re wrong because they’re feeling a certain way. They’re supposed to.

“I’m just saying OK, I want to lead by example by doing positive. I’m not saying what they’re doing is wrong. I just have my ways of going about things.”

Jerry Jones has been wrongly accused of ordering his players to stand, based on a story that proved to be false last fall. The episode that has been widely circulated on social media is false.