WATCH: Cory Booker’s “Spartacus” Moment Just Got Spoofed, As Well It Should Have 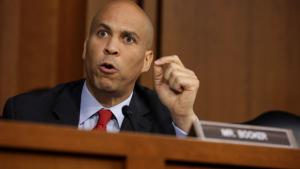 Any congressman who compares himself to Spartacus on the floor of the Senate is likely setting themselves up for a spoof, and in the case of Cory Booker, we’re sure glad he was the one to do it.

Booker, joining a multitude of Democrats taking advantage of their camera time during Brett Kavanaugh’s confirmation hearings to virtue signal and wax dramatic about the impending apocalypse that is Kavanaugh’s inevitable confirmation to the Supreme Court, made a complete fool of himself this week when he described breaking the Senate rules as his “Spartacus” moment.

Booker had boasted over releasing what he claimed were confidential documents related to Judge Brett Kavanaugh, bragging, “This is about the closest I’ll probably ever have in my life to an ‘I am Spartacus’ moment.”

Booker’s boasting turned out to be hollow after it was revealed that the documents had already been offered to him before his braggadocio took center stage. Bill Burck, the George W. Bush records representative who led the review of Kavanaugh’s records, stated, “We cleared the documents last night shortly after Senator Booker’s staff asked us to. We were surprised to learn about Senator Booker’s histrionics this morning because we had already told him he could use the documents publicly. In fact, we have said yes to every request made by the Senate Democrats to make public documents public.”

Enter the Washington Free Beacon, who was not going to let him get away with this silliness without having a little fun first:

You’ve got to admit, he set himself up perfectly for this.