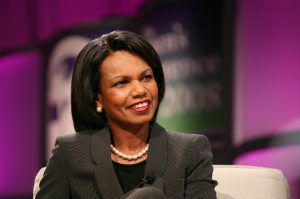 It must be so difficult to walk through life, and especially a career in news media, when you have the memory of a goldfish with a head injury.

That, coupled with beyond-insane levels of bias and Trump Derangement Syndrome, can really be the only logical reason why so many pundits and politicians on the left keep propping up false narratives on literally every single issue.

When they pin the blame for society’s ills on a president who has hardly even finished his first term in office, however, it’s up to those of us with slightly healthier long-term memories to set the record straight.

In a recent interview, Rice offered a brilliant response to NBC reporter Sheinelle Jones’ allegation that “race relations” are “worse” under the Trump presidency.

As America’s first black secretary of state (who got there thanks to her incredible qualifications, her razor-sharp analysis of the Union’s most complex problems and her utter refusal to sugar-coat the truth), Rice’s opinion in response to this worn-out narrative is especially noteworthy.

So, when Jones proffered the idea that public discourse “feels worse now when we’re talking about race,” and later blamed that on Trump and that it “comes from the top-down,” Rice’s response was just incredible.

“It sure doesn’t feel worse than when I grew up in Jim Crow Alabama,” Rice fired back. “So let’s drop this notion that we’re worse race relations today than we were in the past. Really? That means we’ve made no progress.”

The only thing that could’ve made that righteous statement more epic would be if lightning had struck in the background right as Rice suggested Jones “drop this notion.” Brilliant.

“I think the hyperbole about how much worse it is isn’t doing us any good,” Rice continued, clarifying the issue in the straightforward fashion we respect her for. “This country’s never going to be colorblind. We had the initial original sin of slavery. It’s still with us.”

“For people who say, it’s top-down, it starts with the president—” argued Jones, before being cut off by Rice.

“Oh, come on, alright,” Rice interjected. “I would be the first to say we need to watch our language about race. We need to watch that we don’t use dog whistles to people. But when we start saying, ‘Oh, you know, it’s worse today,’ no, they’re not.”

And, here’s where that whole ‘not having the memory of a rusty hammer’ thing comes into play, as Rice proceeded to recall firsthand experiences with racism as a child.

After leaving a segregated school—which should tell you right there that Rice is old enough to remember that, no, things are sure as heck not worse today—Rice attended a school where only three other black girls were in her class with her.

Someone pin a medal on this woman.