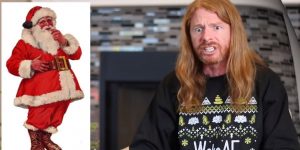 So he no doubt refused to pass up the opportunity to brutally mock all the outrage over the holiday classic “Baby It’s Cold Outside,” and he certainly has done so beautifully.

In one of his many epic “Ultra-Spiritual Life” episodes, he goes off on a mock rant against the song that has been around for generations and liberals just decided is totally about date rape.

“It’s either I’m wrong, or this song has always been about date rape, and it’s just taken took 74 years for someone as intelligent as me to discover it. And I’m not wrong!” he rages in the hilarious video.

Have you ever heard the SJW mentality summarized so perfectly?

If not, he nails it when he later says “If my interpretation of the song is correct, and I know it is, because I’m really angry…”

As for all the other songs in the pop music cannon that are about exponentially more offensive situations than a jazzy seduction from the 1940’s?

“You know  my heart is in the right place because instead of going after Sublime’s ‘Date Rape’ song which is literally called ‘Date Rape,’ I go after a song called ‘Cold Weather,’ because that’s even more clearly about date rape!” he explains.

After all, he has a mission:

“The world is full of problems,” he explains, “and instead of solving problems, I’m just here to find more problems!”