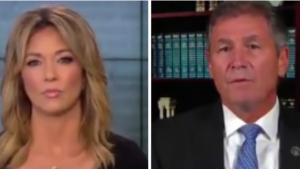 I know, I know, we’re all sick of hearing about the Kavanaugh accusations, but it’s taking up 83% of the news cycle right now (FACT) and it’s impossible for any sensible person not to at least briefly consider screaming from the rooftops that for the love of all that is holy there’s nothing anyone can do to prove or disprove these claims!

OK, maybe that’s just me, but seriously, its times like these our national focus and political integrity go haywire, and whether or not the claims Christine Ford has made are true or not, the Democrats know this full-well and are thrilled with the wrench they just threw in Kavanaugh’s gears.

If they hadn’t spent the last three months griping and moaning about his appointment, they might be able to pull off their feigned moral outrage a little bit better.

But here we are.

The Conservative Tribune reports that a CNN interview most likely did not go the way producers had hoped when former FBI assistant director calmly explained to Brooke Baldwin that there’s essentially nothing the FBI can do to prove Kavanaugh guilty of attempted rape in 1983.

Because, you know, due process and evidence and jurisdiction and stuff.

“The FBI has no independent jurisdiction to open up a stand-alone investigation of rape allegations or assault allegations that may have taken place 36 years ago,” Swecker said. “That’s a local crime. Unless it involves a federal official or on federal land, or has some federal nexus, there’s just no jurisdiction to do it.”

The interview got even more disappointing for the left when Baldwin asked Swecker what evidence the agency would look at to investigate Ford’s claims.

“There just can’t be any forensic evidence. I would be shocked if they brought a garment forward that might have DNA or something like that,” Swecker said.

Swecker went on to say that the evidence would be “strictly interviews” of the alleged victim, the alleged perpetrator, anyone else who might have been at the party, her therapist or anyone else she may have confided in about the incident.

Is that really so hard to understand?