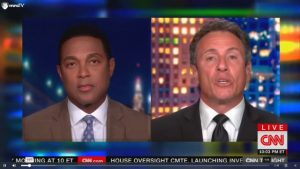 There’s no greater hive of scum and villainy than that of CNN News, where left-wing extremists play the part of propaganda creators for the Democratic Party, helping to shoe horn folks into accepting socialism and big government intrusion into their private lives with every broadcast.

To prove this point, anchors Chris Cuomo and Don Lemon decided to go on a massive rant Tuesday evening, shredding white people, Trump supporters, and then turning their hatred on Christians and the Christian religion as a whole.

During this little tantrum, they mentioned the idea of “Christian privilege.” This by itself proves these people have no idea what they are talking about. Would this be the “privilege” of shutting down one’s business for refusing to cater a gay wedding?

Declaring that “America has a problem with race,” Cuomo and Lemon blasted critics of Marxist critical race theory as supposedly being frightened by a “boogeyman” and accused President Trump of “scaring white people” for his political advantage, because “scaring white people works.”

The two claimed poor white people are being “pitted against” people of color by rich white people and being played for a “sucker.”

The two hosts also singled out Christians. “If you are a Christian, there is a privilege in the society because we prioritize Christianity.”

“So, this whole idea about there is no privilege in society for white people. That’s bulls***. There is a privilege,” Lemon ranted. “If you are a Christian, there is a privilege in the society because we prioritize Christianity even though we’re supposed to be a country that believes in freedom of religion. … But yet, what do we do? We demonize Muslims. We demonize Islam. We demonize anybody who is pretty much not a Christian or even if you don’t believe in religion.”

This pair of coconuts then went on to say that white Trump supporters are scared of “kooky lefty and crazy blacks burning down their neighborhoods.”

Well, given the fact we’ve watched the above mentioned individuals burn down whole neighborhoods for months now, I’d say that if people are afraid of that happening in their area, it’s a reasonable fear.

Especially given the fact that Democrats in leadership positions are doing nothing to put this violence to an end.

This little spiel right here is a reminder that they hate Trump because they hate us, the average American. He represents us. And they know it. Remember that come November.