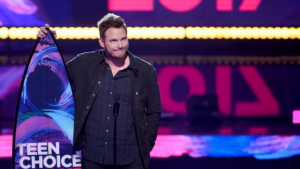 Chris Pratt is an enormous breath of fresh air in an era of annoying and preachy Hollywood celebrities who assume we care about their radical political views rather than just how well they pretend to be someone they’re not on camera.

Pratt is very good at pretending to be someone he’s not on camera, for sure, and no matter what you think of the things he says or does off screen, his box office numbers prove most audiences agree.

But what he does when he has the attention of crowds in person is always admirable: instead of ranting about Donald Trump’s status as literal Hitler (or risking his career by praising him), he often takes the opportunity to give all glory to God, plain and simple.

He shocked audiences when he shared a powerful Gospel message at the MTV Movie Awards of all places, and we were happy to see took the same opportunity at the Teen Choice Awards over the weekend, telling the crowd:

“I Want to thank God. I always do that when I’m up on a big platform in front of a bunch of young faces. I say “I love God. That’s my thing. And you should too.”

Now, this might not seem particularly newsworthy because Pratt certainly isn’t the first famous person to thank God for his success.

But as Brodigan over at Louder With Crowder points out, now is an era when it really matters to do so:

Here’s why we always highlight Pratt and videos like this. Because I’m sure the comment section is already filling up with “Why are you wasting my time with this,” “yargle blargle, he’s getting divorced,” and “We the People don’t care what celebrities say.” The latter group wearing their Donald Trump shirt while saying it.

Because you know who cares about what celebrities say? A lot of Americans. Especially the younger and more impressionable among us, who would watch Teen Choice awards. It’s sad an A-list celebrity who openly professes his faith without being marginalized as a “Christian actor,” or an A-lister who legit seems like a decent human being stands out. But here we are.

No one is saying you should worship Chris Pratt. But if he’s going to have to courage to speak out on his faith, the least we can do is write favorably about it.

So thank you, Chris Pratt, for always being willing to stop everything and praise Him, and reminding us that when we cut through all the noise of the culture wars, He is all that really matters in the end, anyway.