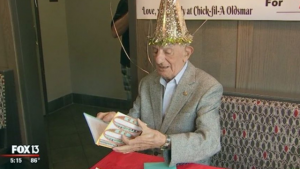 Chick-fil-A is just the best.

It’s almost as if the hate they get for being owned by people who believe the Bible converts into delicious food, impeccable customer service, and heartwarming philanthropic acts the more it grows.

Earlier this year, one HuffPo contributor even complained that Chick-fil-A was so delicious, SJWs keep forgetting to boycott and go back to eat there despite the whole “man shalt not lay with mankind” thing.

So it was no surprise to learn that when a regular customer of one Florida Chick-fil-A location turned 100, they gave him a birthday party and free food for life.

Oh, and the customer had been eating there once a week for 20 years, which is already in itself an epic tribute to the awesomeness that is Chick-fil-A.

There was a very special 100th birthday party at a Florida Chick-Fil-A last week.

Stephen Bellissimo is one of the restaurant’s regulars, who has been visiting the same location for two decades.

When workers found out he was turning 100 years old, staff members started planning a surprise party.

They decorated Bellissimo’s favorite booth and then told him that he’ll now get Chick-Fil-A for life. Bellissimo told the staff that it’s the best gift he could have ever received.

He said he plans to go to Chick-Fil-A every day.