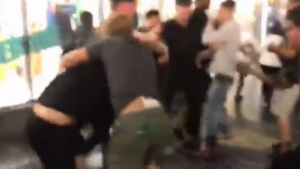 Donald Trump’s Hollywood star has had quite a week!

On Tuesday, an angry Trump-hater with apparently nothing better to do smashed the star to smithereens with a pickaxe. He was arrested and promptly elevated to status of hero by the Hollywood elite, who clearly have no idea how politics work (why vote and get active when you can just commit acts of vandalism? #winning).

Then, when Trump supporters, headed by Joy Villa, the recording artist of MAGA-dress-at-the-Grammies fame, gathered at the freshly restored star to show support for the President and “spread love,” they were quickly joined by anti-Trump protesters who had no interest in any love spreading.

Rather, confrontations quickly dissolved into a brawl.

[INSANE VIDEO]: Fight breaks out at Donald Trump’s star on Hollywood Boulevard. All because @ElijahSchaffer was wearing a Trump jersey and USA hat.

Be safe out there. The intolerance is real! pic.twitter.com/eGk6pYKiti

Whatever happened to “love trumps hate”? It seems to me that, more often than not, it’s the Trump supporters and conservatives who are genuinely trying to be peaceful, loving, and start a conversation.

Leftists who can’t cope with reality, more often than not, seem only interested in violently lashing out and will accept any outlet for their rage, whether that be a Hollywood star or a Trump supporter’s face.