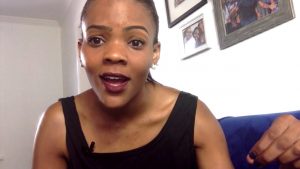 Black common sense conservative Candice Owens published this amazing video this week and I love her for it!

It’s amazing how far common sense and logic can take you if you’re willing to hear it.

After the violent clashes, on both sides, in Charlottesville last weekend. Candice rants against the liberal media establishment’s reporting on the violent rioting that resulted in one death and several injuries. In her video (below) she identifies the REAL enemies in America today.

“White supremacy and the KKK. Really? That’s what you guys want me to be concerned about this week? I mean there are around 6,000 klansmen left in our nation. You want me to seriously process that every day when I wake up?… Why did we not hear a single thing about David Duke, white supremacy and the KKK the entire time Obama was in office? Do you think they were all hiding underground waiting for the next white president? Meeting by the light of the moon? Do you really actually mean they weren’t still meeting, holding protests and having rallies? Maybe the media wasn’t covering it. Use your brain. I mean the media is actually fabricating a reality tonight… Honestly everybody involved in this fake racial war is a loser.”