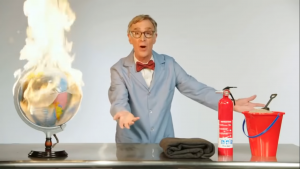 Bill Nye the “Science” Guy has been back on TV and in the public eye quite a bit in the last decade, mostly to promote climate change and bring us awkward videos about sexual preferences and gender.

The zany “science” guy (quotes entirely necessary) we loved as kids who explained things like how electricity worked or how genes determine gender (that old antiquated idea) has carved out a little career for himself in a post-90’s world, and you know what, good for him.

Ken Ham needs to debate with someone, after all, and he sure gave The Ark a lot of likely unintended publicity.

Nye’s Netflix show, Bill Nye Saves the World, ran for a few years on Netflix and managed to pack in plenty of perfectly curating ragingly leftist moments (the aforementioned awkward videos) along lots and lots of climate alarmist narrative.

But hey, a lot of the kids that grew up watching Nye probably go for that kind of thing now, so you know, you do you, “science” guy.

This week, however, Nye apparently couldn’t hold back. His show is off the internets, he hasn’t grabbed any headlines for the last few years, that AOC chick is hogging all the climate alarmist rhetoric, it was apparently time to blaze his way back onto the scene.

He lit a globe on fire and cussed at people who question anthropogenic climate change.

“By the end of this century, if emissions keep rising, the average temperature on Earth could go up another four to eight degrees,” Nye says in the video, which was played on John Oliver’s HBO program, “Last Week Tonight.”

“What I’m saying is the planet’s on f—ing fire. There are a lot of things we could do to put it out — are any of them free? No, of course not. Nothing’s free, you idiots,” Nye added.

“Grow the f— up. You’re not children anymore. I didn’t mind explaining photosynthesis to you when you were 12. But you’re adults now, and this is an actual crisis, got it? Safety glasses off, motherf—ers.”

This is why they never called him the Bill Nye the Solid Rhetoric Guy.