WATCH: Before Bernie Was a Socialist, He Was Just a Plain Old Communist 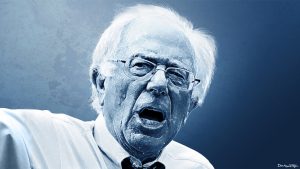 Bernie Sanders is running for president again, which means the slew of videos from way back when he openly discusses his great love of full-on communism have surfaced, and we get to enjoy cold hard proof that the dude is a dyed-in-the-wool dirty red anew.

That’s right, in case you, like AOC, weren’t alive in the 80s, Sanders wasn’t pushing no “it’s democratic socialism” in the ’80s.

He was all in for Soviet-style, Cuban-inspired Marxism.

Check out some of these hot takes Reagan Batallion has been posting on Twitter, like this video praising Castro in Cuba and how sad he was that JFK was warning against communism (for you youngsters out there, once upon a time in our great nation the Democrats were not actually socialists, as recently as about five minutes ago):

Video: @BernieSanders, University of Vermont, 1986, recalls his excitement watching Castro’s revolution “rising up against the ugly rich people.” & his sick feeling watching JFK speak out against communism in Cuba.

Also bashes the @nytimes for lying about communism. pic.twitter.com/OUqzLFbsvz

Then there was that time he complained about how people just don’t understand how awesome bread lines are:

Today we promise to do everything we can to protect the United States from the scourge of Socialism that has destroyed millions of lives throughout the years.

Democrats, reject the demise of your party and country, say no to @BernieSanders. pic.twitter.com/t7GkcPQWwQ

And of course, it’s very important to remember that, mass-murder aside, the Soviets had an amazing public transportation system:

And DON’T YOU DARE call Manuel Ortega a dictator!

🚨 This video is absolutely frightening: 1985: @BernieSanders bashes a reporter for referring to the brutal communist dictator of Nicaragua Daniel Ortega as a Communist and Marxist, and not as the Democratically elected President of Nicaragua, demands that he praise the regime. pic.twitter.com/Dtpr6Jmh3D

Well, what can you really say though? Soviets are just so much fun to party with: