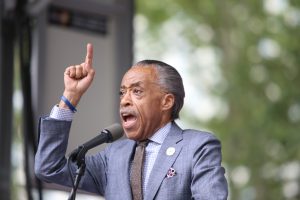 Baltimore is boiling over. Now that President Trump has actually said something about it (in public, no less! Perish the thought!) gears are starting to turn.

Of course, actual Baltimore residents aren’t the least bit interested in political posturing—these folks just want their elected officials to do their jobs and fix the city.

Instead, they get a photo op with Al Sharpton. Hooray! Just what everyone wants.

At a recent Baltimore rally over the weekend, Al Sharpton put lips to megaphone (as is his way) to wax eloquent about the marvelous qualities of Elijah Cummings and Baltimore itself. But he was met with jeers and mockery by the people who actually live in Baltimore.

Watch the carnage unfold in the video below:

WHOA: Al Sharpton gets heckled in Baltimore by fed-up resident.

"You go back to New York! Our schools are failing us… You’re just a hustler! Go back where you came from!"https://t.co/Q8cKLmrH4Z

Of course, the liberal media wants us to believe that the cycle of poverty and urban decay can never be overcome (at least not without more leftist policies and taxpayer dollars) and that anyone calling on the city of Baltimore to stand up, shake the dust off, and clean up their act (and their city) is a mean, nasty racist.

Sharpton’s visit to Baltimore is not about actually helping those who live, work, and suffer in the city. I didn’t see the guy with a broom and a trash bag in his hands to help chisel away at the decades-old trash in the city’s streets, did you?

Of course not. This visit is all about optics which, in turn, are all about keeping a chokehold on Baltimore and other cities suffocating under the iron grip of leftist leaders.

The people of Baltimore aren’t having it.