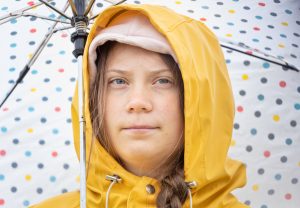 Finally, someone on the left is at least demonstrating an ounce of common sense regarding the issue of 16-year-old eco-activist Greta Thunberg and the exploitation of children for political gain.

“People are suffering, people are dying. Entire ecosystems are collapsing. We are in the beginning of a mass extinction,” Thunberg said during an absolute meltdown at the UN this week, shouting “how dare you!” to the adults she claims have “stolen” her dreams and her childhood by failing to address climate change.

“There will not be any solutions or plans presented in line with these figures here today because these numbers are too uncomfortable and you are still not mature enough to tell it like it is,” Thunberg added. “You are failing us but the young people are starting to understand your betrayal. The eyes of all future generations are upon you and if you choose to fail us I say we will never forgive you. We will not let you get away with this. Right here, right now, is where we draw the line the world is waking up and change is coming whether you like it or not.”

While many on the right were ready to meme this girl into oblivion (low hanging fruit, friends), her statements reveal the depths of the utter hysteria and panic these people are living with. All the evidence against global warming in the world is seemingly powerless to change the conclusion that people like Thunberg are clinging to with such unhinged fervor.

But, there’s one big problem.

Thunberg is a kid. She’s a kid, y’all. A kid freaking out about mass extinction.

Don’t get me wrong, I hope my kids have the intelligence and the tenacity to be politically active, but for good and rational causes. This is mania. This girl is going off the deep end, and the left is cheering her on.

Australian Prime Minister Scott Morrison, however, isn’t having it.

In a speech given to the United Nations earlier this week, Morrison shredded those exploiting the “anxiety” children like Thunberg have as a result of mainstream climate hysteria.

“We must respect and harness the passion and aspiration of our younger generations, we must guard against others who would seek to compound or, worse, facelessly exploit their anxiety for their own agendas,” Morrison said. “We must similarly not allow their concerns to be dismissed or diminished as this can also increase their anxiety.”

“Above all, we should let our children be children, let our kids be kids, let our teenagers be teenagers,” Morrison added. “while we work positively together to deliver the practical solutions for them and their future.”

Australian PM Scott Morrison slams those who “facelessly exploit” children’s “anxiety” over the climate to push their far-left agendas:

“Above all, we should let our children be children, let our kids be kids, let our teenagers be teenagers” pic.twitter.com/F3zp30r5Xe

Thunberg’s tirade was followed by public consideration of whether or not she’s working with a full box of crayons, prompting leftists to bare their fangs in defense of the golden child.

Most hilariously, however, was an article for Psychology Today titled, “Stop Infantilizing Greta Thunberg With Claims of ‘Abuse”, which fired back at those daring to question just how sane it is to give this girl such a massive platform. Just before denouncing anyone who dares to stand up to the girl, PT admitted that she does in fact suffer from mental illness: 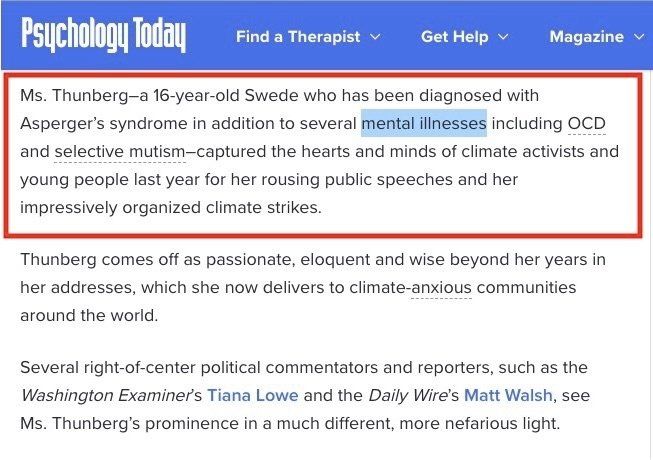 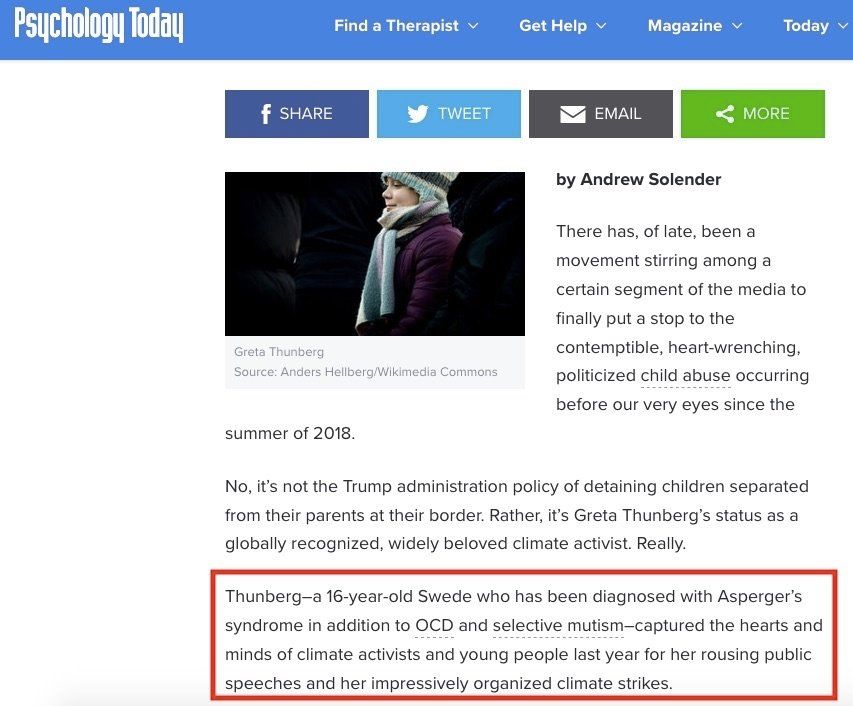 The Washington Examiner offered another take on Thunberg, declaring that her “fame-seeking stage-parents”, particularly her “fading opera starlet mother” who performed internationally, are “pimp[ing] her out” without regard for the long list of impairments and mental illnesses Thunberg suffers from:

The case of Thunberg is even more egregious. She began suffering from depression as a child, by her own admission, in part because she learned about climate change at age 8. She was later diagnosed with autism and obsessive compulsive disorder and gradually became despondent as she obsessed over her fear of climate change. She developed mutism and an eating disorder so severe that she once went two months without food, and she stopped going to school. Her only sibling, a sister named Beata, also suffers from Asperger’s and OCD, as well as ADHD.

Now tell me, does it seem healthy to place a child with this many mental illnesses under the spotlight of public scrutiny, with a sole focus on the very phenomenon and associated alarmism that triggered her in the first place?