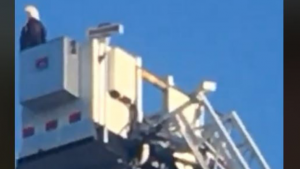 In less than 24 hours, a video made by Minnesota firefighters has amassed more than 3 million views for its powerful and evocative imagery.

As Fire Chief Jerry Streich and his crew were preparing to honor the memories of their lost brothers who died responding to the terror attacks on September 11th, just before the national moment of silence, Streich noticed an incredible thing on the display they’d set up.

A bald eagle had decided to perch on top of the fully extended ladder they’d used to hang an American flag.

After watching for a moment, stunned, Streich realized he should capture the moment on video, which he did, posting it to Facebook.

“Look what landed on top of the aerial on 9/11,” Streich says in the video. “Isn’t that unbelievable? This eagle just landed on the aerial while we were doing the 9/11 memorial. Phenomenal.”

The fire truck, which was parked on the Highway 10 bridge, was holding an American flag to honor and remember those who lost their lives on 9/11. While the Andover Fire Department — along with several surrounding departments — held their tribute, an eagle perched at the top of the aerial truck, creating a chill-inducing moment.

“There’s no better symbol to represent America today than a flag but then for an eagle to land on a fire truck holding a flag, I mean, it doesn’t get much more symbolic than that,” Streich told them.