WATCH: Alexandria Ocasio-Cortez Compares Her Victory to the Moon Landing 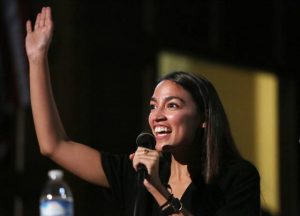 Alexandria Ocasio-Cortez is the gift that just keeps on giving.

Not politically, of course, her far-left progressive politics are the stuff of Orwellian dictators, and her policies, if implemented, would destroy our nation as we know it (that is, when they’re actually feasible, which most of the time they’re not.)

But the hilarious and ridiculous things she says really do help take the edge off knowing that an idiotic millennial who doesn’t know how our federal government works will soon be making laws come January (that is, if she can get through her Schoolhouse Rock marathon in time.)

And she just keeps on delivering.

This week, in another beautiful AOC gaffe, she compared her political victory to that of the moon landing, which was neither political nor embarrassing for our nation, like her election.

The Daily Wire reports that, speaking at a press conference for the far-left environmental group Sunshine Movement, the Congresswoman-elect made several of her signature vague and inspiring-sounding statements along with the hilariously bad reference to the moon landing:

“This is not just about a clean new deal,” Ocasio-Cortez said. “This is about a new deal for the United States of America.”

“Because in every moment when our country has reached the depths of darkness, in every moment when we were at the brink, at the cusp of an abyss and we did not know if we would be capable of saving ourselves, we have,” Ocasio-Cortez continued. “We’ve done it. We’ve dug deep and we’ve done what we thought was impossible.”

“We went to the moon. We electrified the nation,” Ocasio-Cortez continued. “We established civil rights. We enfranchised the country. We digged deep and we did it. We did it when no one else thought that we could. That’s what we did when so many of us won an election this year.”

For someone with so much Soros money behind her, you’d think someone would have smacked her upside the head and told her to brush up on both civics and history at this point.

What an utterly ridiculous comparison to make.

At a press conference this morning, Democratic socialist @Ocasio2018 compared her 2018 election victory to historical American accomplishments such as the moon landing and the Civil Rights movement. pic.twitter.com/2JMfFiTg3h

The moon landing, again, is not typically regarded as a political event. If anything, it was unifying, as it was meant to flex our muscle for the Cold War-era Soviet Union.

This makes comparing the political victory of a young Marxist particularly bad, on top of super egotistical.

Add the fact that she’s painting the moon landing as some kind of Democratic victory makes it even more facepalm-worthy, as a Republican was in office when it happened.

Socialist Alexandria Ocasio-Cortez: "We are the party of King, of Roosevelt, of the ones who went to the moon!"

#1. Going to the moon was not a Republican vs. Democrat thing.
#2. It happened under President Nixon, a Republican. pic.twitter.com/jmbv40ZTb5