WATCH: Abolish ICE Protesters in Portland Build a Wall to Keep out Police. The Irony Is Apparently Lost on Them. 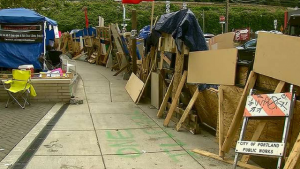 Next time someone asks you for the definition of irony, which can be tricky to explain, you can just point them right in the direction of this story.

The left has, over the past few months, gotten so incredibly unhinged over the Trump administration’s pushback against their precious open border policies, that they’ve gone as far as to call for the government agency Immigration and Customs Enforcement, or ICE, to be abolished.

That’s like suggesting we should do away with police entirely because you think current laws are too harsh on drug offenders.

I’m not entirely sure there haven’t been leftist groups that have called for that.

Not much of the leftist platform makes a lot of sense.

The Abolish ICE protest movement has been growing, aided by fringe Democrat leaders like Alexandria Ocasio-Cortez, which is pretty impressive considering she hasn’t even been elected to Congress yet.

However, Democratic leaders who have, in fact, actually been elected to Congress like Chuck Schumer and Maxine Waters have been forced to come out and oppose the idea of abolishing ICE, and you know you’ve become fully unhinged if even Maxine Waters disagrees with your platform.

Abolish ICE-ers fully believe that our borders should be wide open for anyone who “needs” to enter the US, so considering they’re opposed to having borders at all, they’re definitely opposed to Trump’s Big, Beautiful Wall, the construction of which many Americans still eagerly await.

Of course, like most progressives, these protesters seem to have no problem when it comes to building a wall to keep them safe from the police. Because of course they don’t

On Wednesday, the Daily Wire reported that “Occupy ICE” protesters in Portland had been given eviction notices and were ordered to pack up their belongings and demonstrate against vague notions of tyranny and oppression elsewhere.

But while some, indeed, cleared out (in a manner of speaking, at least), others decided to stay and fight, erecting — ironically — a “border wall” to enclose the Occupy ICE PDX encampment and stationing “border guards” around their tiny independent nation.

No, really. The border wall, which is, in fact, quite high (perhaps, say, to prevent border jumpers), went up over the weekend.

“On Wednesday,” they explain further, “bystanders noticed that Occupy ICE PDX had furthered militarized their border, stationing a ‘border patrol’ around the perimeter, and charging their new ‘wall guards’ with monitoring their makeshift border wall around the clock.”

It’s almost as if walls are a good idea for protecting people, and having people patrol the borders created by those walls are an effective means of further keeping the people on one side of the wall safe from people who wish to jump the border.