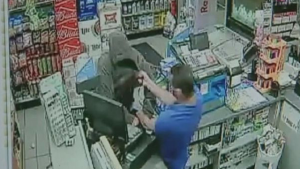 Looks can often be deceiving, as one would-be robber found out the hard way in Massachuttes this week when he encountered a clerk who was far more prepared than he was to go to blows.

Ebrahim Gawargi’s tale of the tape isn’t too impressive; he weighs just 120 lbs and stands at 5′ 7″, but his passion for and dedication to martial arts paid off when 46-year-old John Benedict attempted to force Gawargi to give him the cash out of the register at the Mobil station he works at in Norwood.

“I just do it to have fun, I don’t do anything, just come to training, get some fun over here,” Gawargi told local station Boston 25.

Video footage shows the two battle inside the store for at least five minutes before Gawargi gets the upper hand and pins down the suspect onto the floor. After throwing a couple of punches, Gawargi puts the suspect in a sleeper hold and knocks him out.

“I just tried to do what I had to do,” said Gawargi. “He grabbed my hand, I had over six hundred dollars in my hand.”

“I didn’t want to kill him, I needed to let him breathe, [but] when he kept moving I gave it more pressure to let him sleep again,” said Gawargi.

A customer outside the store witnessed the struggle and alerted police.

“If I had my way when people got robbed they would just turn over some cash and separate and then call police when it’s safe to do so,” said Norwood Police Chief Bill Brooks. “This was a little bit unusual because of the skills of the clerk.”

John Connors, a trainer at the martial arts academy where Gawargi dedicates 3-4 hours of training a day, says he’s an excellent student and that he’s not surprised he was willing to throw down with the potential robber.

“He’s an excellent student, he’s very respectful, he takes his training very seriously,” said Connors. “He’s a very determined guy, a very very scrappy guy, so I’m not surprised he got the best of the guy.”

Wow! Store clerk skilled in the martial arts turned the tables on a robber last night. I’m going to be reporting on this only on #boston25 all new at 11 tonight. pic.twitter.com/rywyNRo5gD