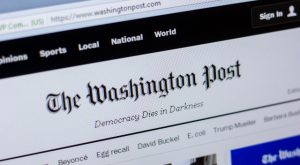 A progressive editor working for the Washington Post took to Twitter to post some threats she received on the social media platform, using them as proof that America is both “racist” and a “patriarchal society.” What she neglected to mention was that the “threat” in question was in response to a tweet she made in which she said “white women are lucky that we [black people] are just calling them Karens…and not calling for revenge.”

Oh how the left loves to play the victim card. Perhaps, just maybe, Karen Attiah — the editor — shouldn’t have tried to stir the pot so much with such a statement? Just a thought.

People are just getting ridiculous these days.

Via The Washington Examiner:

“Be very careful with hate. It is a dangerous and thankless master,” the threat, apparently sent to Attiah via text message, read according to the screenshots she posted. “Calling for revenge only begets revenge. You don’t want to wake white men who will protect their women and come after you and yours.”

I explicitly said Black people *ARE NOT* calling for this.

A good amount the threats and hate mail I’ve been getting are white men threatening me with violence to —*checks notes* protect “their” white women.

Exactly the point I’ve been making about “Karen” behavior all along. pic.twitter.com/vv4f7SWtn0

“America is a racist *and* patriarchal society,” Attiah responded in a separate tweet. “We cannot dismantle the full range of oppression in this society without addressing how toxic ideas of white masculinity interplay with the notion of ‘protecting’ their women from Black people.”

America is a racist *and* patriarchal society.

We cannot dismantle the full range of oppression in this society without addressing how toxic ideas of white masculinity interplay with the notion of “protecting” their women from Black people.

Attiah deleted the tweet that started this whole mess, but hey, the damage was done by that point. No matter how you slice the cheese, this lady kicked off the fiasco by essentially putting out a threat of her own and lumping all black people in her statement.

It’s horrible to see so many folks, who are living free and successful in this country, trash it on a regular basis. This is insulting to the max. There are so many folks who want to be here and have the same opportunities that these individuals enjoy, who would love to be in their position in this “Patriarchal society.”

Hopefully, Attiah wakes up to the truth about how good we all have it in living here in the greatest nation on earth.