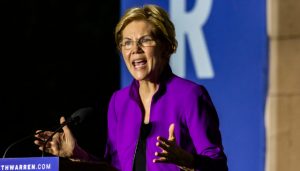 Sen. Elizabeth Warren swore up and down she wouldn’t participate in high-dollar fundraising events during her campaign for president, but it seems this particular principle is no longer something she plans to live by as she’s now working toward running just such an event for Democratic presumptive nominee Joe Biden.

The NY Times is reporting that Warren’s setting up a “virtual” fundraiser for Biden’s campaign, an event that typically brings in up to $100,000 per person who attends, based on information gleaned from past invitations. There was a previous “virtual” event held with Hillary Clinton which offered tickets for $2,300 per “plate” and up into six-figures. And this price didn’t even include any sort of perks, like photo opportunities.

Warren refused to do any high-dollar fundraising events during her presidential campaign, even though she had previously raised millions through private donor events just months before, during her Senate re-election campaign.

“The senator held high-dollar fundraisers during her 2018 Senate reelection campaign. However, along with fellow populist and 2020 rival Sen. Bernie Sanders of Vermont, she eschewed them early in 2019 soon after launching her campaign for the Democratic presidential nomination,” Fox News reports.

Warren’s campaign team raised funds for the senator’s presidential aspirations through online small-dollar efforts and through super PACs, which were allowed to raise millions of dollars in donations. However, Warren had no input or made any appearances in connection with those efforts.

Guess principles are only something Democrats hold to when it’s politically expedient for them to do so. Kind of shady, but hey, what else should we expect from the left, right?