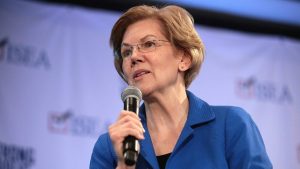 Sen. Elizabeth Warren is now asking the Federal Reserve to split up Wells Fargo, which just so happens to be one of the biggest banks in the world.

In a letter penned by Warren and sent to Fed Chairman Jerome Powell on Tuesday, she urged the leadership of the Federal Reserve to use its authority to revoke Wells Fargo’s current status as a financial holding company and split its banking subsidiary off from its business as a financial services provider.

In the six-page letter to Powell, which details several instances of the bank’s “misconduct” over the past decade or so, she made the case that Wells Fargo, which is currently led by CEO Charlie Scharf, must be reined in.

“Continuing to allow this giant bank with a broken culture to conduct business in its current form poses substantial risks to consumers and the financial system,” she stated in the letter.

Warren pointed out that in 2016, bank employees surreptitiously created millions of bank and credit card accounts without the knowledge of the customers involved. Wells Fargo fired thousands of employees during the ensuing scandal, which resulted in a $3 billion settlement with the Justice Department.

In 2018, the central bank, then led by now-Treasury Secretary Janet Yellen, took the extraordinary step of imposing an asset cap on the bank.

Warren argued that even after having the asset cap imposed, Wells Fargo has actively worked to expand its investment banking activities. She lashed the bank as “simply ungovernable” for operating the way it has since the cap was imposed.

“I am therefore once again asking the Fed to further limit Wells Fargo’s ability to continue harming its consumers and undermining the safety and integrity of our banking system,” the Massachusetts senator wrote.

“The Fed must revoke Wells Fargo’s FHC status and order the company to develop a plan to ensure that the 65 million customers that currently rely on Wells Fargo’s consumer banking and lending services are protected through the transition,” she then said to Powell in the letter.

It doesn’t seem that Wells Fargo was phased in the slightest by the letter from Warren, as the price went up a bit in trading on Tuesday morning. When the company was contacted by the folks over at The Washington Examiner, they gave them a document that was made as a reply to Warren, providing an outline of measures the company had been using since 2019 to help improve both transparency and oversight.

“We are a different bank today than we were five years ago because we’ve made significant progress,” the bank went on to say in its statement.