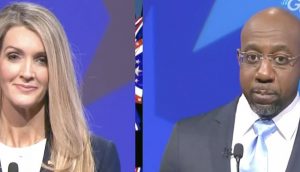 Georgia Democratic Senate Challenger Raphael Warnock recently stated in Sunday night’s debate that 2018 gubernatorial candidate Stacey Abrams’s refusal to concede the race was justified, while President Trump’s refusal to do the same is not.

Gee, so what it seems this guy is saying is that he doesn’t find allegations of voter fraud to be a justifiable reason for a president to refuse conceding an election. Good to know.

“Listen, suppression is something that happens all across our country. It’s happened here in the state of Georgia,” Warnock said during the  debate against GOP incumbent Sen. Kelly Loeffler.

Abrams lost her bid to Republican Gov. Brian Kemp in 2018 by less than 55,000 votes. Theirs was the closest governor’s race since 1966, but it was marred by allegations of voter suppression after Kemp insisted on overseeing the contest as Georgia’s secretary of state.

Warnock is essentially admitting that everything is permissible for the left to do, but don’t you dare try to do the same thing if you sit on the other side of the political aisle.

This, of course, is pure hypocrisy. But, then again, what else is there to expect from someone like Warnock? Here is a guy who has become notorious for anti-American views and rhetoric and who claims to be a minister of the gospel.

A statement like this is fairly mild compared to the other crazy stuff he’s spouted.