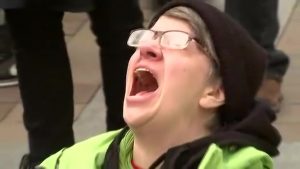 Conservatives have been joking (OK, half-joking) about the phenomena oft-referred to as “Trump Derangement Syndrome” for years now, but it turns out that psychologists are actually seriously diagnosing it.

In a fascinating piece for Politico titled “Trump May Not Be Crazy, But the Rest of Us Are Getting There,” the facts about the psychological state of the American psyche speak for themselves.

Trump, despite the very best efforts of all the Trump-deranged political pundits and laypeople alike to prove otherwise, is a pretty mentally stable guy. This isn’t that surprising, considering his job performance as President. He’s a shrewd businessman, undoubtedly the biggest troll our nation has ever seen, has a huge ego, and little filter on Twitter at 3 AM, sure, but he’s not crazy.

Americans, particularly those who oppose him, however, are going nuts with him in office.

During normal times, therapists say, their sessions deal with familiar themes: relationships, self-esteem, everyday coping. Current events don’t usually invade. But numerous counselors said Trump and his convulsive effect on America’s national conversation are giving politics a prominence on the psychologist’s couch not seen since the months after 9/11—another moment in which events were frightening in a way that had widespread emotional consequences.

Empirical data bolster the anecdotal reports from practitioners. The American Psychiatric Association in a May survey found that 39 percent of people said their anxiety level had risen over the previous year—and 56 percent were either “extremely anxious” or “somewhat anxious about “the impact of politics on daily life.” A 2017 study found two-thirds of Americans’ see the nation’s future as a “very or somewhat significant source of stress.”

While Trump’s behavior has been painstakingly examined through the lens of the APA Diagnostic and Statistical Manual with the hope that one glorious day the Democrats can somehow convince Trump’s staff to invoke the 25th Amendment, it turns out that being a loudmouth habitual Twitter user who loves to brag simply doesn’t make someone mentally unfit to serve.

However, vehemently opposing Trump’s presidency seems to be having a negative impact on mental health across the nation.

Jennifer Panning, a psychologist from Evanston, Illinois, calls the phenomenon “Trump Anxiety Disorder.” She wrote a chapter on it in a collection by mental health experts called “The Dangerous Case of Donald Trump.” In an interview, she said the disorder is marked by such symptoms as “increased worry, obsessive thought patterns, muscle tension and obsessive preoccupation with the news.”

A study from the market research firm Galileo also found that, in the first 100 days after Trump’s election, 40 percent of people said they “can no longer have open and honest conversations with some friends or family members.” Nearly a quarter of respondents said their political views have hurt their personal relationships.

This goes beyond office arguments or the Thanksgiving gathering in which some cousin or in-law drinks too much and someone storms out after the diner-table conversation turns to politics. Even the closest daily relationships can suffer.

At the end of the day, you (OK maybe it’s just me) have to feel pity for those so utterly convinced that Trump is a terrible president that their own lives are becoming terrible in a mental prison of their own making.

I advocate we start praying for people who are so led astray by inflammatory rhetoric and 24/7 cable news propaganda that they can’t even cope with their regular, daily lives, lives that have been not in any way negatively impacted materially by the Trump presidency and likely.