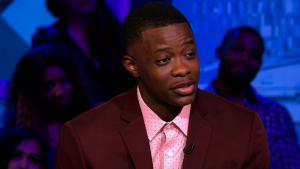 The left has been fawning over one of their recently-appointed heroes, James Shaw Jr., who showed incredible courage when he managed to stop the crazed gunman who recently opened fire on a Tennessee Waffle house.

Of course, this man is the epitome of a true hero, and he’s been nothing but humble since the media vultures began circling him, trying to evoke reinforcement of their anti-gun narrative simply because Shaw managed to stop the shooter without being armed himself.

Contrast this with how little attention they gave to Steven Willeford, the NRA-trained firearms instructor who ran out of his house barefoot armed with his AR-15 to track down the Sutherland Springs church shooter.

Both these men are true heroes, but only one is a media favorite…because he wasn’t armed.

Shaw appeared on Van Jones’s show on CNN over the weekend, and Jones tried to rope him into some good old-fashioned CNN-style Trump bashing.

“You touched the whole world,” Jones asked, trying to set him up. “I mean all you have to say is Waffle House hero. Everybody knows who you are. Have you heard yet from President Trump?”

“At this time I haven’t heard anything, but that is not to say he didn’t try to contact me or not,” Shaw replied.

This is where Shaw showed true grace and dignity, something that has been seriously lacking from the realm of public discourse in this era of rabid tribalism and identity politics.

“I know he has a busy agenda, busy schedule,” Shaw replied. “Maybe he just hasn’t gotten around to me and maybe my time is coming. It’s not for me to judge whether what he does is just, you know, I did what I did. I didn’t really do for recognition, I did it just to save my life, honestly.”

Now, this is what a truly honorable man acts like on national television. Without betraying how he felt about the president one way or the other, he defied the line in the sand the media won’t stop trying to draw and gave a perfectly polite and humble response.

Instead of trying to hook this man into their preferred narratives about self-defense and firearms, the media should take note on what common courtesy and decency look like.