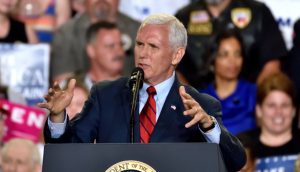 In a move that’s probably going to make a lot of folks upset, Vice President Mike Pence gave Vice President-elect Kamala Harris a little ring-a-ding-ding to offer up congratulations and assistance ahead of the inauguration to be held next week.

Two aides who work for Harris confirmed the phone call transpired. Officials say that Harris and her hubby Doug Emhoff might pay Pence and the second lady a visit at their official residence, Number One Observatory Circle.

It was Harris and Pence’s first conversation since the election.

Pence has said he will attend President-elect Joe Biden and Harris’s swearing-in next week. Trump has said he will not and is expected to depart earlier that morning from Joint Base Andrews.

Say what you will about this, but at least Pence is more courteous than the left would be if they were in his position.