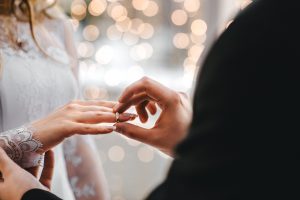 A writer for Vox has taken this whole socialism thing to a level even most socialists can’t co-sign. That’s quite an accomplishment, I’d say.

In a tweet yesterday, Matthew Yglesias expressed his disapproval of how much of their own money folks are spending on weddings and wished the government would step in to curb this travesty.

Thinking he knows how better to handle even the most personal financial choices in others’ lives is the mark of a jerk, but wanting to use the force of law to compel people to do as he thinks they should is the mark of a megalomaniac.

Does this sound like a dude who’s being pressured into paying for a Bridezilla’s fantasy wedding and is whining about it on Twitter or what?

Now, I could go along with this dude’s sentiment that brides- and grooms-to-be should plan their weddings within their means. Heck, my only wedding expenses were the gas to get to the church and a pair of hamburgers on the way back home—elopement for the win!

But there’s a heck of a huge difference between an opinion and the encouragement toward the organic, gradual shift of societal norms to favor what may be a wiser financial choice and calling on the government to enforce your whims, you madman. This is like cobbling together Frankenstein’s big government monster out of Dave Ramsey and Josef Stalin. It wouldn’t be pretty.

Before Yglesia seemingly realized the criminally stupid nature of his opinion (or just got tired of people pointing that out) and deleted his tweets, a handful of the fine People of Twitter™ were happy to set him straight:

Thank you to Ms. Jennifer. for giving the idea such a succinct and accurate label that really allows its stupidity to shine through.

Why does the government need to get involved with this at all? https://t.co/QUC7uLknIt

Can we please start asking this question about oh, I don’t know, everything the government is involved in? Just an idea.

There’s already a well-established wedding industrial complex. Let’s not get government involved in it. https://t.co/Syuv5IbeZG

Can’t argue with that.

Here's a thought: the government shouldn't try to run every aspect of my life. Are you not adult enough to handle this on your own?

Valid question. And then, the burn:

And, of course, if anyone disagrees with Yglesia, they’re a just an irrelevant conservative whose brain has been slowly melted by years of pressure under the Trump administration:

Yglesia needs to hear himself. So this dude helped him out:

Wow. So his marriage regulation WASN'T satire. And he thinks anyone who disagrees is a "conservative." Name one freaking member of Congress or a state legislature, @mattyglesias, who's more capable at running your life than you. https://t.co/FkOIhZwge3

I mean, I feel like I could trust Dan Crenshaw with my family’s budget, but I’m gonna pass.

It’s a pity Yglesia dirty-deleted the thread, there’s probably much more where that came from.

You know, wildly uninformed opinions on Twitter can really cause a lot of stress for people’s interpersonal relationships. Maybe the government should step in. See how that works?