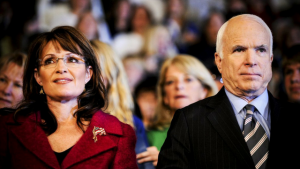 I mean, this isn’t that surprising, and yet…seriously?!

John McCain was no favorite among Republicans, but as soon as news spread of his passing on Saturday, foes and friends took to social media to honor the memory of a true American hero.

Whether or not you agreed with his actions during his time in the Senate, McCain was an undeniable patriot who spent the vast majority of his adult life in service to his country, first in the battlefields of Vietnam, showing particular valor in his loyalty to his men at the Hanoi Hilton, and then during his long career in politics.

When a family is in mourning and a hero has passed on, you would think everyone could put politics aside and unite over the common goal we have to preserve the values of the great nation we’re all fighting to defend.

Mere hours after McCain lost his battle to cancer, they were whining on Twitter about McCain’s presidential campaign and how he’s responsible for Trump.

In a now-deleted Tweet, they wrote “You can draw a straight line from John McCain to Donald Trump–through Sarah Palin.”

“The party of Donald Trump began almost 10 years ago to the day, when John McCain tapped Sarah Palin to join his ticket,” Vox political editor Laura McGann wrote, according to the Daily Wire. “He proved willing to empower a demagogue when he thought doing so would improve his political fortunes, exactly the sin so many of his colleagues in the Republican Party have committed since Trump won their party’s nomination.”

She went on to pontificate that McCain “sacrificed his values to win” adding that “After being diagnosed with cancer, McCain still defended Palin’s performance but said he regretted not picking Lieberman as his running mate.”

Enter the Twitter outrage mob, who raked them over the coals:

A hit piece an hour after the man died. Very classy, @voxdotcom. https://t.co/2GFlbKh2kg

Stunningly, after penning said hit piece an hour after McCain died, McGann was more concerned about how long it had taken for someone to call her a bad word:

Took 17 minutes to be called the c-word for pointing out that John McCain’s legacy includes empowering Sarah Palin.

As she kept pouting, she kept getting slammed for her undeniable journalistic faux pas:

Maybe don't tweet? No one said you can't mention that he picked Sarah Palin, in fact, I'm sure most of his obituaries will note that he did. It's that you're reducing a lifetime of service down to this that is just gross. He was the first to admit he was seriously flawed btw. https://t.co/zD9bfr0wZM

We certainly hope there is more rest in the next life for John McCain then there’s been after his passing on Twitter.