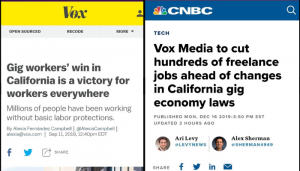 I sit here, speaking to my dear readers, as a freelance writer.

That’s right, I dare to forego the usual 9-to-5, the job stability, and the fringe benefits that typically come with the traditional workplace. It’s totally worth it, and I think freelancing, along with skilled trades, may hold the key to revolutionizing our economy, but I digress.

It’s not that crazy, but rhetoric out of California—where I thankfully do not reside—would have you believe that freelancers like me are virtual indentured servants, denied the most basic rights afforded to American workers.

Californian legislators have just past AB5, a bill championed by leftists who claimed it would “protect” gig workers and freelancers.

Actually, to be specific, leftists like Vox Media who are now laying off hundreds of their freelancers after the law was passed.

The legislation, largely aimed at companies like Uber, Lyft, DoorDash, and PostMates, requires freelancers and gig workers to be hired as employees with benefits like health coverage and minimum wage.

Under the new law, contractors and non-employees are prohibited from writing more than 35 articles per year for their clients.

To give you an idea of how insanely ridiculous that is, I have the privilege of writing anywhere from 30-60 articles for this wonderful website per month. That’s one or two articles each weekday.

Were I to suddenly be subject to this asinine law, I can’t even fathom how I could make 35 articles per year work out. But, hey, the government clearly knows better than I do.

Vox Media’s sports brand, SB Nation, issued a statement on Monday announcing the layoffs in advance of the bill taking effect in 2020:

“This is a bittersweet note of thanks to our California independent contractors,” said John Ness, executive director of SB Nation. “In 2020, we will move California’s team blogs from our established system with hundreds of contractors to a new one run by a team of new SB Nation employees.”

In a separate memo reported by CNBC, Ness said that California contractors can apply for a full-time or part-time position in California. Freelancers who wish to keep writing for SB Nation can still do so, but “need to understand they will not be paid for future contributions,” he said. “We know this may be a difficult decision, so we’re giving everyone affected 30 days to decide what works for them.”

The irony of Vox supporting a bill that will gut their workforce is just too painful to bear, as the Washington Times’ Matt Mackowiak points out:

“Unfortunately, this is exactly what we predicted would happen, and exactly what we told lawmakers would happen. There is simply no incentive for digital media companies and outlets to keep working with California-based freelance writers,”  California Freelance Writers United co-leader Alisha Grauso said in a statement to The Hollywood Reporter. “Even if companies aren’t misclassifying their employees, the language of the bill is simultaneously so draconian and so vague that many companies just don’t want the headache of interpretation or risk of violation. And why would they? They can simply go outside of California to find more writers.”

“Vox is the most high-profile outlet we’ve seen laying off writers in response to AB-5 so far, but other companies have already sent out emails to CA freelancers terminating their contracts,” Grauso added. “Others are blacklisting CA-based writers from applying to freelance gigs. Frustratingly, even if a few staff jobs are added in response to AB-5 — which is unlikely except at the biggest outlets with the deepest pockets — the handful of roles created won’t make up for the thousands of freelance writers losing steady gigs because of the bill. The math is completely upside-down and freelance writers are coming out on the losing end.”