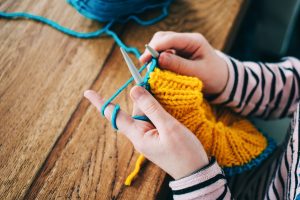 Anti-conservative Big Tech is getting right out of hand.

Conservatives are already shadowbanned, Zucked, or outright deplatformed at an alarming rate, but this latest incident is taking this too far.

Now, all but the most deeply closeted Trump supporters will be banned from Ravelry, an “online knitting and fiber arts community.”

You read that right. A knitting forum is seeking to eradicate every single syllable in support of the president from their website.

On its website, Ravelry describes itself as “[a] place for knitters, crocheters, designers, spinners, weavers and dyers to keep track of their yarn, tools, project and pattern information, and look to others for ideas and inspiration. The content here is all user-driven; we as a community make the site what it is. Ravelry is a great place for you to keep notes about your projects, see what other people are making, find the perfect pattern and connect with people who love to play with yarn from all over the world in our forums.”

I’m not sure what any of that has to do with federal-level politics, but okay.

The website announced its decision to purge those mean, hateful deplorables in a tweet over the weekend:

We are banning support of Donald Trump and his administration on Ravelry. We cannot provide a space that is inclusive of all and also allow support for open white supremacy. More details: https://t.co/hEyu9LjqXa

We are banning support of Donald Trump and his administration on Ravelry.

This includes support in the form of forum posts, projects, patterns, profiles, and all other content.

The statement added that all users who find themselves banned will still have access to their data, including purchased items. So, that’s a relief. They’ll be censoring folks, but at least they won’t be robbing them of digital property they paid for. That totally makes it okay.

Wow, what benevolent dictators these knitters are. That’s mighty kind of them to signal to their hordes of users (whom one can only assume demanded this sort of policy in the first place) not to start an all-out forum war against any non-leftist users. Such sweethearts.

The statement added that users can “help” by flagging certain items on the site “if they constitute support for Trump or his administration,” such as “unacceptable” projects, patterns, and new forum posts. At this point, the ban appears to focus on content rather than users, but it likely won’t stop there.

Although this super-duper, warm, fuzzy, inclusive space can’t actually act as thoughtpolice and root out the more taciturn Trump supporters, why would anyone stay where they’re clearly not wanted?

As for not banning actual users just yet, it’s not working out so well now that those anti-Trump knitters smell blood in the water:

It may be worthwhile to note that Pancho, the Ravelry user complaining of being restricted from the site, appears to be from the Netherlands, a centered-left country where American politics are more interesting to watch than team sports and soap operas combined. I’ll avoid going on a page-long tirade about the uniquely American snowflake culture when it comes to political diversity (and how Europeans think we’re crazy for it) and instead let Pancho’s experience speak for itself.

For their part, a handful of other folks on Twitter suggested that Ravelry should also make an effort to ban any vocal support of former Vice President Joe Biden for his history of working with segregationists in Congress. So far, crickets.

So much for inclusivity.