Virginia Senate, House Vote In Favor Of Kicking Up The Minimum Wage 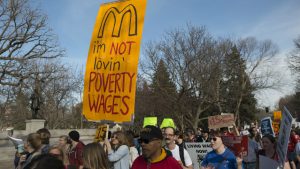 It seems that no matter how many times you try to get through to folks concerning the negative economic impact of raising the minimum wage, politicians and the people who vote for them — on the left especially — will ignore it all and do it anyway.

The Virginia General Assembly has passed legislation that will lead to the minimum wage being $12 per hour by the year 2023.

Gov. Northam is expected to sign the bill into law.

This version of the minimum wage bill came out of a joint conference committee with House and Senate Democrats who disagreed on how the minimum wage increase should affect lower-income regions of the commonwealth. The compromise bill essentially tables this debate until 2022.

The initial House version, House Bill 395, sought to increase the minimum wage to $15 per hour across the entire state, while the initial Senate version, Senate Bill 7, sought a regional approach, which would have increased the minimum wage to $15 per hour only in the wealthiest parts of the states. Lower-income regions would have had their increases tied to the average regional salary.

The compromise bill has a provision that will make way for the minimum wage to be hiked up to $13.50 by 2025 and $15 per hour by 2026, though it will require legislative action.

What folks don’t seem to get is that when you hike up the minimum wage, all you’re really doing is going in a circle. You see, business owners will need to take on the cost of this hike and find a way to offset it.

How will they do that, you ask? By passing the cost on to customers, thus increasing the price for goods and services and eventually raising the cost of living. Which then puts folks in minimum wage jobs right back where they started.

This is common sense, folks.