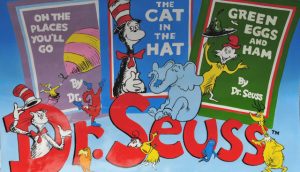 LONDON – JULY 5. Dr Seuss is a BookBench sculpture; one of 50 celebrating London’s literary heritage with famous book titles on July 5, 2014 at various locations across London.

An entrepreneur from Virginia, who is also a Republican gubernatorial candidate, bought up a bunch of Dr. Seuss books and then handed out copies of them to children after six of the titles were canceled due to supposedly having images that were deemed racist and insensitive.

Pete Snyder, a GOP gubernatorial primary candidate, told The Daily Wire that his campaign bought a bulk of Dr. Seuss books to pass out to children after a Virginia public school district announced that it would not promote Dr. Seuss’s literature on the author’s birthday.

“Eighty percent of Virginia schools are closed right now and these bureaucrats are kowtowing to the woke mob and trying to cancel Dr. Suess, versus actually opening up the schools for students and teachers,” Snyder stated.

In late February, Loudoun County Public School district in Virginia announced that it will no longer recognize Dr. Seuss on his birthday, March 2, which is also known as Read Across America Day. In an announcement obtained by The Daily Wire, the school district said that Dr. Seuss’s books contain “racial undertones” that are not suitable for “culturally responsive” learning.

On Read Across America Day, the company that publishes Dr. Seuss books announced that it will stop selling six books because the books “portray people in ways that are hurtful and wrong.” The company will no longer publish “And to Think That I Saw It on Mulberry Street,” “If I Ran the Zoo,” “McElligot’s Pool,” “On Beyond Zebra!,” “Scrambled Eggs Super!,” and “The Cat’s Quizzer.”

“Under pressure from the woke mob [Loudoun County Public School] is trying to ‘de-emphasize’ Dr. Seuss books from Read Across America Day,” Snyder said. “Oh the places they’ll go to deny the science, appease radicals, [and] continue to cause irreparable harm to [Virginia’s] children. #OpenOur Schools,” Snyder posted up on Twitter.

Under pressure from the woke mob @lcpsofficial is trying to 'de-emphasize' Dr Seuss books on #ReadAcrossAmericaDay. Oh the places they'll go, to deny the science, appease radicals, & continue to cause irreparable harm to VA’s children. #OpenOurSchools. pic.twitter.com/Tqf0CAF1Cm

Snyder’s top priority for his campaign is getting schools open and taking on teachers unions who are gumming up the works, likely so they have bargaining leverage, caring little for what happens to kids.

“[Teacher unions] are the number one reason why our schools aren’t open right now,” Snyder went on to say. “Instead of trying to get our classrooms and our schools open, they’re spending, wasting time and resources on ridiculous things like getting rid of Green Eggs and Ham.”