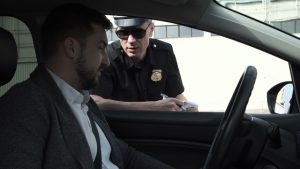 Some of the things folks are being “forced” or “required” to do in light of all the ridiculous hoopla over race relations in this country are the very definition of the word “absurd.”

Like, for example, how anyone who gets pulled over in the state of Virginia will now have to answer a series of racial questions, thanks to a brand spanking new law known as The Community Policing Act.

Okay, let’s try to parse this out a bit, shall we?

Weren’t we told not that long ago that it’s racist for cops, or really anyone for that matter, to ask about someone’s race, as such a question is considered a microaggression? Now police are being required to violate that principle by taking time to ask each person pulled over a serious of questions in order to collect data as a means of proving whether or not the department that employs them is racist?

Stop the ride. I’d like to get off please.

WTOP reported that sheriffs, local police officers, and state police officers will now ask drivers about their race, ethnicity, and gender to compile data that will be used to determine if police departments disproportionately target certain groups.

The politician who sponsored the bill, Del. Luke Torian (D-Prince William County) told legislators while considering the bill that it would prohibit “law enforcement officers from engaging in bias-based profiling.”

“A similar law passed by the D.C. Council yielded data that led the ACLU of D.C. to issue a scathing report last month, claiming that Black people are disproportionately likely to be stopped in almost every police district in the nation’s capital,” WTOP reported. When black people were stopped by police, they were “more than six times as likely to undergo a pat-down or search of their person when compared to white people who were stopped,” the outlet reported on June 17.

In addition to asking information about drivers’ race, ethnicity, and gender, police officers will also have to record “the reason for the stop, the location, whether anyone was searched or arrested and whether a warning or citation was issued,” WTOP stated in their report.

Police departments in the state have already begun to issue press releases to inform the public of the questions they are now required to ask.

Here’s a portion of one such statement from Arlington, Virginia:

Members of the public should be aware of the new information collected, as it may involve the officer asking them additional questions on a traffic stop. On each stop conducted by a local law enforcement officer or State Police officer, the following information will be collected, based upon the officer’s observation or information provided to them by the driver:

The data collected during traffic and investigatory stops will be reported to the Department of State and included in the Community Policing Reporting Database. Access to this database will be provided to the Department of Criminal Justice Services (DCJS) for the purpose of analyzing data to determine the existence and prevalence of the practice of bias-based policing and the prevalence of complaints alleging the use of excessive force. In addition to the reporting required by the Community Policing Act, the Department’s Office of Professional Responsibility will continue to conduct internal audits on all allegations of misconduct and fully review and investigate incidents involving use of force.

This stuff is just getting ridiculous. So much of the narrative the left pushes about modern racism is contradictory. One minute they say not to ask questions. The next they demand questions be asked. Which is the right way? They can’t both be right. Either it’s not okay to ask, or it’s okay to ask.

Either way, there’s great hypocrisy in the progressive handling of this issue. Here’s to hoping these folks wake from their insanity sooner rather than later.