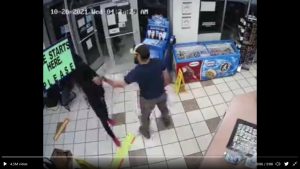 A retired Marine who ended up stopping a would-be robber at a gas station in Arizona accepted a valor award this week, but believe it or not, it was what he was wearing at the time that’s got him grabbing headlines.

The Yuma County Sheriff’s Office awarded James Kilcer, 32, who served a tour of duty in Afghanistan, with the YCSO Citizen’s Valor Award while he sported a “Let’s Go Brandon” t-shirt and a “MAGA” hat.

The award is given to to those who display “extraordinary heroism and exceptional courage while voluntarily coming to the aid of another citizen during an incident involving criminal activity at extreme, life threatening, personal risk in an attempt to save or protect human life.”

It’s described as the “highest award for citizens whose actions warrant recognition,” according to the sheriff’s office.

In a photo posted to the Facebook account of the office, Sheriff Leon Wilmot is shown handing Mr. Kilcer the award, as the good Samaritan wears his “Let’s Go Brandon” shirt.

The Daily Wire reported previously that the thwarted robbery was captured on surveillance footage, which immediately went viral when it was posted online.

Kilcer disarms the gunman in the video, which then sends his accomplice bolting back out of the store. He then proceeds to hold down the now disarmed gunman until police officers arrive.

“On Wednesday, October 20, 2021, at approximately 4:30 AM, Deputies responded to an armed robbery report at the Chevron located at 10747 S. Fortuna Road. Upon arrival, Deputies learned that three suspects entered the Chevron, one of them armed with a handgun. As the armed suspect walked by Mr. Kilcer while pointing the weapon at the cashier, Kilcer reacted without hesitation, quickly disarming the suspect and taking him to the ground. He was able to immediately gain control of the gun and detain the suspect until Deputies arrived. As a result, no victims were injured and no property loss was sustained,” the sheriff’s office said.

ZERO FEAR:
When this Yuma, AZ veteran saw some criminals pop in guns high — he didn't wait for things to potentially go south.

“The Marine Corp taught me not to [mess] around,” he later said.

'The few, the proud' for a reason.
More on the story on @ABC15 at 10. pic.twitter.com/fGjKthcXvO

Kilcer later told ABC 15 Arizona during an interview that the robber “needs some Jesus.”

“That boy needs some Jesus,” the 32-year-old went on to say. “He’s going down the wrong path real quick.”