Violent Rioting And Looting Explodes In Philly After Police Shooting 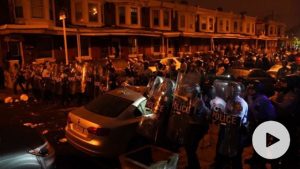 More rioting and looting exploded in America last night, this time in the city of Philadelphia, as angry protesters got into a massive altercation with police officers over the shooting death of a 27-year-old black man that happened earlier in the day.

Walter Wallace, who is alleged to have been holding a knife, was fatally shot by local law enforcement who were responding to a call about the a male with a weapon in Cobbs Creek. He apparently “advanced toward” the cops, who then opened fire “several times.”

Wallace was shot in both the shoulder and chest. He was taken by police vehicle to the hospital where he later died.

Mass looting breaks out at clothing and shoe store during tonight’s BLM riot in Philadelphia. https://t.co/htXN1rsbCk

Following Wallace’s death, which was recorded and posted on social media, hundreds of people — some armed with bricks — protested in the 52nd Street commercial district, and the demonstration quickly turned violent. Police cars and dumpsters were set ablaze and NBC10 Philadelphia reported that at least 30 police officers were hurt.

A 56-year-old sergeant was struck by a truck and was hospitalized with a broken leg, among other injuries.

Stores including several Rite Aid pharmacies, a restaurant, and clothing and shoe shops were broken into. Two ATMs were also reported to have been smashed.

More than 30 individuals were arrested during the incident.

Folks, this is becoming the default response for liberals. We cannot allow this kind of violence to continue. Democratic leadership in major cities let this stuff go on without punishing those responsible for the damage and it’s severely hindering peace and stability.