Vietnamese Baptist Church Burned During Philly Riots: ‘I Have No Idea Why’ 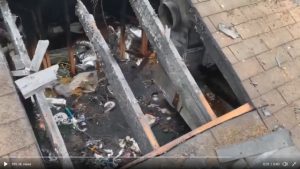 A Vietnamese Baptist church is the latest victim of violent rioters who have been torching the city of Philadelphia ever since the police shooting of Walter Wallace Jr. during a confrontation of police earlier in the week.

“I have no idea why they attacked our church,” Pastor Philip Pham told the Baptist Press. “They burned it from the roof. They threw flammable chemicals on the roof and [flames] burned through the roof,” which also consumed the rest of the building.

This is just shameful on every level.

Pham characterized the damage as a “total loss.”

Of utmost concern to Pham when he received the call informing him that his church was in flames were three hard drives that contained 15 years’ worth of parishioners’ irreplaceable information.

“I prayed right away: ‘God, please protect the hard drives,’” Pham said. “Other stuff can be recovered. But those files will never be recovered.”

Pham said that he was amazed to discover that the hard drives escaped the conflagration. “I saw the routers and modems and things surrounding the hard drives all burned, melted,” he recounted. “But that piece of hard drive, no harm. No harm at all. Just two feet above that, all melted. … That is amazing how God knows our needs and answers our prayers. He is an almighty God. He granted our prayer.”

Pastor Pham said the church had been meeting online, but is now currently looking for a new location for in-person gatherings after their building was destroyed. Pham and other members of church leadership have reportedly been trying to reach out to schools in the area as possible locations from which to broadcast their streams.

“Remember us in your prayer in time of need like this,” Pham urged his other believers. “The church members here need encouragement. The majority of us have very strong faith in Christ, but a minority, a few new believers, they need their faith to grow. Pray for their faith to take deep root in the love of God so they can be steadfast in Him. Not focus on the problem, but focus on Jesus. Please remember us in your prayers.”

There’s no excuse for the kind of devastating destruction we’ve seen this year by individuals who claim to be fighting against police brutality. You cannot fight fire with fire. Instead of trying to win hearts and minds, the so-called Black Lives Matter movement has done nothing but set back race relations by decades with their violence.

Any legitimacy they may have had in their arguments have been shot down. This is not the right way to address concerns. Not at all.