VIDEO: What Elizabeth Warren Just Said About Climate Change On The Eve Of D-Day Anniversary Is Shameful. 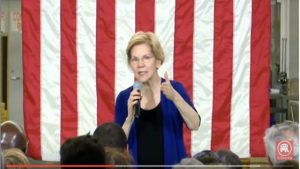 Sen. Elizabeth Warren seems to be absolutely determined to destroy her presidential campaign before it really gets a chance to kick off, what with her desperate attempts to appease nearly every faction of the progressive movement.

She’s already tried to reach millennials by employing social media and pathetically drinking a beer to appear “relatable.” Now she’s doing metaphorical cartwheels to try and get the folks in the climate change crowd behind her by saying that it is a greater threat to our American way of life than the Allies faced in World War II.

This comment is made on the eve of the 75th anniversary of D-Day. Talk about tone deaf.

Speaking to the job training organization Focus:Hope just days before the 75th anniversary of the D-Day invasion, which turned the tide against Nazi German in western Europe, Warren claimed that the “climate crisis in this country, a threat to the very existence of every living thing on this planet,” requires that Americans need to be “all in” on battling it, according to The Detroit News.

She added that the “climate crisis” may, in fact, be a bigger threat to democracy and freedom than Nazi Germany, fascist Italy, and imperial Japan.

But if she believes “climate change” must be approached with a “total war” mentality, Warren’s plan doesn’t seem to address the issue with all that much urgency. Instead of, say, playing hardball with the globe’s major polluters like China, India, and industrialized southeast Asia, Warren’s $1.7 trillion “climate plan” is mostly subsidies for alternative energy companies — subsidies she claims will be “paid for” by cutting tax breaks for corporations like Amazon (even though Amazon claims to be a national leader in sustainable business practices).

Warren must be completely oblivious to how offensive her comments were, especially to individuals who actually served in this war and gave their lives for the cause of defending the world against a complete Nazi takeover. Say what you will, but without American intervention, Hitler may very well have succeeded in his objective and the Jewish people would’ve been wiped out. That’s a terrifying thought.

To make a comment like this is to belittle the actions of these brave men who fought to preserve liberty worldwide, especially given the timing of her comments. She needs to issue an apology immediately, begging for forgiveness for her statement.