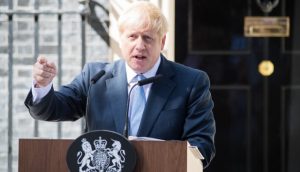 British Prime Minister Boris Johnson made an announcement on Wednesday that specific key coronavirus restrictions in the United Kingdom would be stopped as early as next week, just as he faces more calls to step down from his post.

Johnson made the announcement while addressing Parliament, stating that measures like mask mandates, coronavirus passports, and enforced self-isolation, which were all part of the nation’s “Plan B” COVID response, will be moved from being compulsory to optional.

Parliament was thrilled with his decision, erupting into cheers.

“This morning, the Cabinet concluded that because of the extraordinary booster campaign, together with the way the public has responded to the Plan B measures, we can return to Plan A in England and allow Plan B regulations to expire,” Johnson went on to say. “From the start of Thursday next week, mandatory certification will end.”

“From now on, the government is no longer asking people to work from home … And having looked at the data carefully, the Cabinet concluded that once regulations lapse, the government will no longer mandate the wearing of face masks anywhere,” the prime minister stated, which led to explosive cheers from the crowd of politicians.

Boris Johnson says self-isolation regulations will expire on 24 March and are not expected to be renewedhttps://t.co/1JNrTpKJ18 pic.twitter.com/8b5BEBRXeM

The announcement comes as Johnson battles calls to resign over appearing at a “bring your own booze” party in May 2020, breaking his own lockdown rules at the time. He claims that he believed the function was a work-related event and that attending the function would be within the bounds of the government’s policy.

Labour Party leader Keir Starmer said that his party “does not want to see restrictions in place longer than necessary” but called into question Johnson’s motives given the scandal.

Responding to the prime minister, Starmer asked Parliament, “Can the PM share the evidence behind his decision and that he’s not just protecting his job.”

The prime minister replied by saying, “the scientific evidence is there for everybody to consult,” going on to assure everyone that the decision was reached based on accurate numbers concerning widespread testing and vaccinations.

Boris Johnson says “The scientific evidence is there for everybody”https://t.co/vBlve9AILl pic.twitter.com/K6iF4ZnCE2