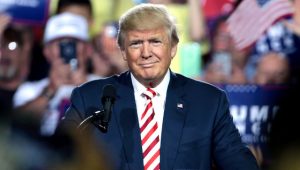 President Trump has made it pretty clear over the last few years that he’s not a fan of the journalistic work being done over at CNN — and who could blame him, since they’ve dedicated themselves to destroying his administration — but he has a particularly strong distaste for their White House correspondent Jim Acosta.

Acosta has a well-earned reputation for being a bit of a jerk and a loudmouth, so it’s not surprising the two men buttheads on a frequent basis.

Hilariously, Trump cracked on Acosta during a visit to Japan and the audience got a real kick out of it, erupting into laughter. You can bet Acosta is probably curled up in the fetal position somewhere bawling his eyes out over all this.

“And what is it with your coziness with some of these dictators and autocrats at these summits?” Acosta asked. “With Mohammad Bin Salman, the Crown Prince of Saudi Arabia, when you were asked about the case of Jamal Khashoggi, you did not respond to that question in front of the Saudi Crown Prince.”

“I don’t know that anybody asked me,” Trump responded.

“Were you afraid of offending him on that subject?” Acosta asked.

“No, not at all,” Trump responded. “I don’t really care about offending people. I sort of thought you’d know that.”

Acosta – are you afraid of offending him on that subject?

Pres. Trump: Not at all. I don't really care about offending people. I sort of thought you would know that

After briefly talking about Acosta’s book, Trump said while pointing at the other journalists in the room: “I get along with everybody — except you people, actually.”

Say what you will about Trump, but the man definitely knows how to work a crowd, and the fact that he doesn’t give a rip about offending people is one of the reasons so many middle-class, average Americans love the guy.

In an age where political correctness rules the day, it’s nice to have a man who is blunt, open, and honest about what he believes and how he feels about things. This is far more preferable to someone who blows smoke up your backside and just tells you what you want to hear.

The world could definitely use more of that kind of thinking right about now.