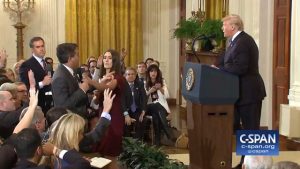 President Donald Trump thoroughly destroyed CNN reporter Jim Acosta during on Wednesday, completely taking him apart over his less than professional behavior toward White House press secretary Sarah Sanders and for being a “rude, terrible person.”

Acosta has a well earned reputation for being a completely obnoxious human being, so much so, that even his own fellow reporters try to distance themselves from him.

Here’s what went down.

President Trump tells CNN's Jim Acosta to sit down: "When you report fake news, which CNN does a lot, you are the enemy of the people." https://t.co/X38nyefXC9 pic.twitter.com/MDtQITSCqZ

That might be the most epic, brutal takedown of a left-wing reporter that the world has ever seen. And the thing is, Acosta deserved every bit of it.

At the end of the day, we want reporters to ask solid, hardball questions. That’s what keeps politicians on their toes and held accountable for their actions. And yes, that includes Donald Trump. He might be doing a stellar job so far, but that doesn’t mean he’s immune to corruption. No one is.

However, if you’re going to ask tough questions, they should be fair and presented in a professional manner. Professionalism isn’t something CNN seems to possess these days, which is truly sad.

Hopefully, one day, the mainstream media will remember it’s actual mission, which is to provide objective facts for the public, so folks can make well informed decisions at the voting polls and so that politicians will stay in line.