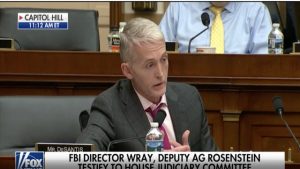 Republican Rep. Trey Gowdy, a man who is known to rip and shred those who come under his steely gaze in his quest for the truth, recently unleashed the full might of his fury on Deputy Attorney General Rod Rosenstein over the ridiculously long Russia collusion probe, telling the Justice Department they need to “finish it the hell up because this country is being torn apart.”

One thing is for sure. You don’t mess around with a man like Trey Gowdy because he will eat you alive.

Gowdy’s excoriation marked a stunning moment at the already-tense House Judiciary Committee hearing, amid a months-long battle between congressional Republicans and the Department of Justice over its handling of both the Russia probe and Hillary Clinton email investigation.

At the hearing, Gowdy, R-S.C., spoke to frustration over the protracted Russia investigation that Rosenstein oversees, suggesting that despite a host of charges against Trump-tied figures, the investigation has not found evidence of presidential wrongdoing.

“Whatever you got, finish it the hell up, because this country is being torn apart,” he said.

“The best thing we can do is finish it appropriately, and reach a conclusion,” Rosenstein assured, adding that nobody should “draw any conclusions” beyond the charges filed.

Gowdy hit this out of the park. It’s well past time to wrap up this investigation and reveal what’s been found in total so our tax dollars won’t continue being flushed down the toilet. If they have not found any actual evidence of collusion with Russia in two years time, they probably aren’t going to find it or it doesn’t exist in the first place.