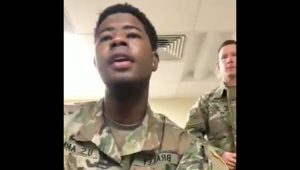 America is a nation divided, thanks in large part to the efforts of the radical left who simply cannot stand the fact there are people in this country who see things differently than they do.

It’s easy when debating important issues that impact the lives of American citizens on a daily basis, to forget that at the root of it all, we’re all human beings living in the greatest nation on earth, where we have liberty to do what we desire with our lives. Many folks around the world are not so lucky.

Part of the reason we have this great privilege is because of the men and women in the armed forces who freely give of themselves to protect our way of life and ensure our liberty is preserved for future generations to enjoy.

Our military is made up of the most honorable men and women our country has to offer, like those of the 82nd Airborne division, who recently posted up video of themselves singing “God Bless America” and “Amazing Grace” online, providing the reminder we all need of what a precious gift it is to live here in America.

I'm no video editor. Hopefully, the power and humanity comes through. pic.twitter.com/GszG4xmE0U

The 82nd Airborne, formed in 1917, is based at Fort Bragg, North Carolina; the division has sometimes been rated the best trained light infantry division in the world. Members wear the “AA” arm patch, which stands for “All American.”

As the USO notes, “Every year on Fort Bragg, combat engineers from the 82nd compete in a re-enactment of the World War II Waal River pontoon boat crossing, a bold combat maneuver that greatly helped the Allies liberate the Dutch city of Nijmegen. 48 U.S. service members from the 82nd were killed during the historic 1944 crossing and are honored today by 48 street lamps positioned along a recently built bridge over the Waal River.”

Some of the World War II exploits of the 82nd Airborne were featured in the 1962 Oscar-winning film, “The Longest Day.” After Hurricane Katrina struck New Orleans in 2005, units from the 82nd Airborne Division expedited evacuations, performed search-and-rescue operations and helped keep order within the city.

Aren’t those some outstanding voices? When is a major sports team going to invite these folks out to sing the National Anthem? Wouldn’t have to worry about them butchering a thing, would we?

God bless these fine men for volunteering to defend our nation.