VIDEO: Students Rail Against Trump Wall Quotes, Then They Find Out Who Really Said Them 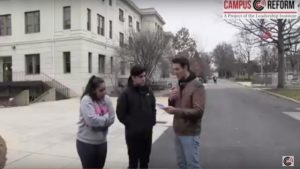 As the government shutdown rages on over the funding of President Trump’s border wall, the good folks over at Campus Reform decided to spread a little enlightenment to college students about the fact that Trump is far from the first politician to support a border wall.

In fact, there’s a lot of people on the left who have also supported strong border security, a fact that’s about to blow a whole lot of young, indoctrinated minds.

As Campus Reform highlights in a video and accompanying article posted Tuesday, until very recently, Democrats have sounded a whole lot more like Trump than #AbolishICE leader Rep. Alexandria Ocasio-Cortez. In fact, here are a few quotes that the conservative group thought college students might be interested in hearing:

“Illegal Immigration is wrong, plain and simple. Until the American people are convinced we will stop future flows of illegal immigration, we will make no progress.” -Senator Chuck Schumer, 2009

“I voted numerous times… to spend money to build a barrier to try to prevent illegal immigrants from coming in. And I do think you have to control your borders.” -Hillary Clinton, 2008

The answer turned out to be no, so long as students were told the quotes were President Trump’s.

Phillips begins by asking the students how they feel about the idea of a border wall generally. He gets a bunch of negative responses, including that a wall is “absolutely horrendous.”

“Everyone has a shared reaction to this,” says one male student, apparently speaking on behalf of the entire student population. “It’s absolutely horrendous.”

Others are more measured, simply dismissing the idea of a wall as “useless” and ineffective, while one cited the “fencing” that already exists.

But things get really interesting when Philips reads the above quotes “from President Trump.”

“It’s divisive,” says one young man. “I think America is a land of opportunity, a place for inclusion.”

“It’s just a negative message,” offers another. “When he talks about illegal immigrants it’s just, one, rude, to talk about people like that.”

The “Trump” quote “underlies” a lot about “discrimination” and “prejudice,” says another student.

“There are racial biases kinda deeply embedded in there,” says a male student.

Other key words dropped by students in response to the “Trump” quotes include “jingoistic” and “dehumanizing.”

When Phillips finally reveals that the quotes were from Schumer, Obama and Clinton, the students are largely left speechless, sometimes laughing: “How about that?!” says one student, smiling.

This just goes to show you how little context these kids are given when they’re being spoon fed the ideology the left wants them to cling to when they are attending their institutions of higher learning.

Most of them have no idea about the history of the beliefs they hold, or how hypocritical their leftist heroes actually are. How they’re willing to switch policy positions depending on how many votes said position will earn them.

Hopefully the work of the folks at Campus Reform will help open a few eyeballs to what’s going on in the real world for these young people.