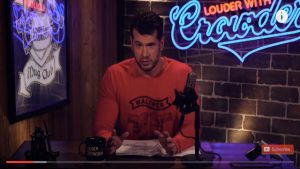 As we’re all well aware by now, social media platforms have been on the warpath against conservative content creators and no one is on the frontlines more in this battle than BlazeTV’s Steven Crowder.

Crowder has been engaged in a battle of epic proportions with YouTube over the demonetization of his video content uploaded to the platform due to the company’s “standards” which really seem to despise anything coming from a right-of-center kind of perspective.

Well, amidst an investigation by YouTube into his channel, Crowder created a hilarious “apology” response video that is guaranteed to put a smile on your face.

“It’s been brought to my attention that many of the comments, videos, and overall tenor and tone of this program have been considered hurtful and offensive to many, and while not in violation of policy guidelines, certainly skirted the line of human decency. I, along with everyone here at ‘Louder With Crowder,’ am not above recognizing my mistakes and attempting to rectify them,” Crowder said in the video. “So I’d like to take this opportunity to formally apologize to all parties involved.”

But that’s where the contrition ended: Crowder went on to list dozens of humorous and controversial insults and bits that he and his team have produced in the past. Crowder hit Fox News hosts, “Drag Queen Story Hour,” Rep. Dan Crenshaw (R-TX), Planned Parenthood, Ben Shapiro, Joe Biden, Megan Kelly, and Rep. Alexandria Ocasio-Cortez (D-NY), among many other targets.

“I apologize to the Drag Queen Storytime, for trampling on what was solely intended to be an educational and family-friendly experience at the Houston Public Library, with sex offenders,” Crowder deadpanned.

Crowder continues on saying, “I’d like to take a moment to apologize to Planned Parenthood for equating their sales tactics with that of a used car salesman, with our installments Crazy Pete’s Abortion Barn, both One and Two, along with Crazy Pete’s Embryonic Stem-Cell Emporium. I’d also like to apologize to used car salesmen everywhere, who work hard and form the backbone of this society’s working class; they did nothing to invite this unwarranted comparison.”

As you can probably already guess, folks online weren’t too happy with the video and began harping on it almost as soon as it was published. Here’s a little sample of the left-wing melodrama:

Gee, that Maza fellow is quite an upstanding citizen, isn’t he? Where do we find more classy blokes like him?

The truth of the matter is, these platforms who are censoring conservatives and Christians deserve all of the mockery they receive and then some. No society has ever been made better, has ever flourished when censorship has prevented people from speaking their mind and sharing their ideas.

Censorship causes a society to stagnate, to stop pushing forward and evolving. It’s impossible to make actual progress in the world without freedom of speech.