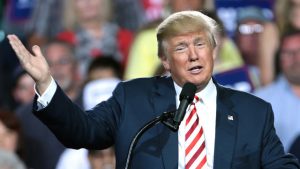 President Trump officially has a new label he can add to the ever growing list, only this one isn’t one handed to him by the ridiculous leftist media looking to mock him and his presidency.

No, this is one he’s earned himself: wedding crasher.

Over the weekend, Trump met with potential SCOTUS justices at his golf club in Bedminster, New Jersey cutting down his list of candidates down to two, with a nominee to be announced on July 9.

However, in between meetings with the potential candidates, Trump wandered through the hotel greeting some of the guests, even attending a wedding that he was not officially invited to.

The President reportedly shook hands and posed for photos with guests (who shouted, “we love you!”). He also took pictures with the bride and groom, Gerald Papa and Jenna Buchholtz, shook the groom’s hand, and gave the bride a hug and a kiss.

This is the second time the president has crashed a wedding at one of his own resorts (at least while he’s been president). He surprised guests at a wedding last year, also at his Bedminster golf club, and is reported to regularly “pop in” on events at his Mar-a-Lago estate.

You can say what you want about President Trump, but the guy knows how to have a good time, even in the midst of conducting important business, which goes to show you that he’s a real human being and not just another schmoozing politician.

It’s refreshing to see something like this from the Trump administration after eight years of dealing with Obama, a total attention hog who spent the majority of his time trying to be cool rather than doing anything constructive to help the country.