VIDEO: Obama Says ‘We Can Always Send Navy SEALs In There To Dig Him Out’ If Trump Refuses To Leave 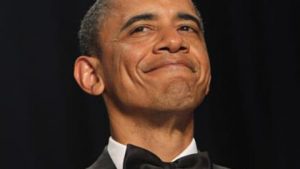 Former President Barack Obama made an appearance on “Jimmy Kimmel Live” Thursday night, where he was asked by the late night host if there was anywhere Trump could hide inside the White House.

Obama responded by saying, “Well, I think we can always send the Navy SEALs in there to dig him out.”

Kimmel kicked off the interview by fawning over the former president saying, “We miss you. Why did you leave us with him?”

Obama answered, “I’ve got to follow the Constitution and Michelle’s mandate, which was eight years and then we had to get out of there.”

Kimmel stated, “The Constitution seems a little shaky lately, so I think Michelle’s mandate is a lot stronger.”

Later, Kimmel prompted Obama’s “Navy SEALs” remark by asking, “Do you feel that when you congratulated Biden and Senator Harris that you were premature in doing that?”

“No,” Obama laughed. “I thought I was right on time. There seems to be some lag … the communications system in the White House used to be better; it was real time. There’s a lot of computers there that actually tell you what’s going on around the world.”

“You know the White House well. You lived there for eight years. Are there places someone could hide? Like, if, say, they were going to be removed? Are there little cubby holes or anything that you know about?” the late night host asked.

“Well, I think we can always send the Navy SEALs in there to dig him out,” the former president replied.

Why do these people assume that Trump won’t leave the White House? Is it just because he’s currently protesting against the election results?

He has good reason not to just accept the vote count, seeing as how there are so many voter fraud claims, some of which have come about from witnesses who signed affidavits.

It’s critical that he check these incidents out to preserve our election system. I have no doubt in my mind that if Biden has won fair and square, Trump will leave without any issues.

These kind of questions and comments are fear mongering.