VIDEO: NBC Report Says Race Relations Worse Under Trump; Condi Rice Is Having None Of That 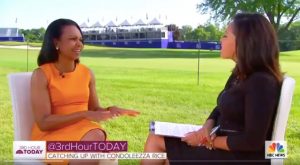 Former Secretary of State Condoleezza Rice, who served under President George W. Bush, recently gave some serious push back when a reporter for NBC News made the claim that race relations in America have gotten worse since President Trump took office.

Gee, guess this individual conveniently forgot how former President Barack Obama stirred up all the strife by constantly bagging on police and how the mainstream media and entertainment industry have done their absolute best to call out racism even where it doesn’t exist.

Must be selective memory.

During a sit-down interview with Sheinelle Jones of NBC, the reporter asked Rice her thoughts on the notion that it currently “feels worse now when we’re talking about race.” She would later specifically tie the suggestion to Trump, noting that the discourse “comes from the top-down,” starting with the president.

“It sure doesn’t feel worse than when I grew up in Jim Crow Alabama,” Rice immediately fired back, as reported by The Blaze. “So let’s drop this notion that we’re worse race relations today than we were in the past. Really? That means we’ve made no progress.”

“I think the hyperbole about how much worse it is isn’t doing us any good. This country’s never going to be colorblind. We had the initial original sin of slavery. It’s still with us,” she added.

“For people who say, it’s top-down, it starts with the president—” countered Jones, before being cut off by Rice.

“Oh, come on, alright,” the former secretary of state jumped in. “I would be the first to say we need to watch our language about race. We need to watch that we don’t use dog whistles to people. But when we start saying, ‘Oh, you know, it’s worse today,’ no, they’re not.”

“My father said, ‘You know what? It’s just fine if they don’t want to sit next to you because you’re black—as long as they move,'” Rice said.

It’s wonderful to see someone like Condie stand up for the president and speak the inconvenient truth, even if it ticks off the vast majority of folks on the left-wing.

Truth of the matter is, race relations have been destroyed by opportunistic politicians who want nothing more than to expand their voter base and keep in power, lining their pockets with other folks’ money. They accomplish this by creating havoc along racial lines, then making themselves look like the white knights — no pun intended — coming to the rescue of minorities.

In reality, they’re the very ones oppressing these individuals to begin with. It’s despicable to the max.

Let’s hope folks wake up to this reality sooner rather than later, and we’re able to shake off the lies and band together to preserve our liberty and way of life from those who wish to destroy it from within.