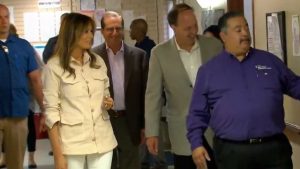 First Lady Melania Trump, a woman who really is far more of a class act than the awful, left-wing media gives her credit for, made a surprise visit to McAllen, Texas Thursday morning to take a look at border facilities and meet with immigrant families to see what she can do to speed up the process of getting these folks reunited with their children.

The First Lady gave a brief speech after touching down, expressing her desire to learn about the detainment process, and “ask you how I can help these children to reunite with their families as quickly as possible.”

First Lady Melania Trump: "I'm here to learn about your facility, in which I know you house children on a long term basis. And I'd also like to ask you how I can help these children to reunite with their families as quickly as possible." pic.twitter.com/LgLddG3NJE

She received a tour of the children’s rooms, and spoke with the facility’s administrators about how they help ensure the children’s physical and emotional well-being.

. @FLOTUS gets tour of kids’ rooms, notes how tidy they keep them pic.twitter.com/E5m90zbp1A

Melania Trump: When the children come here, what kind of state, physical and mental state, do they come here in?

"Usually when they get here, they are very distraught, in the sense that they don’t know where they’re at…The first 24 hours are crucial for us," staff member says pic.twitter.com/bOm0VsyY6s

According to reports, the First Lady told her staff just 48 hours ago that she wanted to take a tour of detainment facilities used to hold immigrant children who were separated from their asylum-seeking parents under a Trump Administration policy that fully enforced asylum protocol — a policy her husband brought to a swift end yesterday with an executive order allowing families to stay together while they wait for an asylum hearing.

The First Lady was reportedly instrumental in pushing her husband to end the policy, as was the president’s daughter and close adviser, Ivanka Trump.

Despite the fact the First Lady has played such an integral role in giving the left precisely what they want, you can almost guarantee they will still hound her and find some way to flip this around for the purpose of criticism. It’s what liberals do.

Regardless, it’s nice to see Melania take such initiative on this issue and get involved in the role that she now finds herself in.

One has to wonder what the leftist media in America will focus on next after this issue is finally resolved. They always have something up their sleeve.