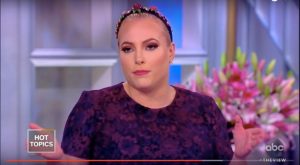 Anyone who has kept up with super liberal morning talk show, “The View,” — why would you torture yourself like that? — then you probably know that Meghan McCain, daughter of the late Sen. John McCain, is not at all a fan of co-host Joy Behar.

The two of them frequently get into verbal fisticuffs on air, but the recent exchange that took place during a rather heated discussion might just be the most explosive interaction between the two yet.

McCain got so fired up that at one point, live on air, she called Behar a “b*tch,” which sent the show scrambling to clean things up.

The hosts of “The View,” including the openly anti-Trump McCain, described the stadium-packing event as feeling like a flashback to 2016, replete with the famous refrain “Lock Her Up!” Like Cuomo, the hosts seemed troubled by the size and enthusiasm of the crowd and wrestled with explaining how Trump is able to keep his base so charged up. Behar, in particular, seemed to really struggle with the issue, insisting that the Democrats are going to be able to pack stadiums just like Trump.

Behar pounced on the chance to paint Trump’s supporters as racist, interjecting: “Who? Black people? And immigrants? Who do they hate?”

“No,” said McCain, clearly irked. “You know what, Joy? I really come here every day open-minded, just trying to explain it. And it’s not a fun job for me every day.”

“But who do they hate?” Behar asked again.

“I know you’re angry,” McCain continued. “I get that you’re angry that Trump’s president, like a lot of people are.”

“But I don’t think yelling at me is going to fix the problem, okay,” said McCain, a line that earned some applause. “I just said it was hard for me,” she said of watching family friend Sen. Lindsey Graham get behind the president. “I’m trying to explain why 2020 is not in the bag for you,” she added.

Right about now is when Whoopi Goldberg stepped in and tried to calm things down, but it seemed her efforts were too little too late.

McCain went on to note that every day when she comes on the show she’s acting as the “sacrificial Republican,” which prompted Behar to respond with a sarcastic, “aww.”

The show then forced a commercial break to give everyone a chance to cool off. When the show came back on air, the pair stressed that backstage they get along very well and actually call each other “b*tch” all the time.

McCain went on to say the fact the two of them can get feisty with each other without taking it personal is proof women can have spirited debates on television.

Here’s the video of the exhchange: