VIDEO: Look What Angry Anti-Trump Protesters In London Do To Elderly Trump Supporter 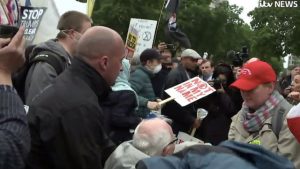 The increasing violence of those belonging to the progressive movement isn’t a uniquely American thing, as we’ve discovered by this week thanks to the physical assault and “milkshaking” of a Trump supporter in Britain during the president’s state trip to the country.

Well, as it turns out, this man wasn’t the only who got attacked. Another elderly Trump supporter was shoved to the ground in an assault that is completely, totally unacceptable. This is not how you handle political differences, folks.

The incident was caught on video, and anti-Trump protesters were chanting “Donald Trump’s not welcome here” as they wrestled with the elderly man, who appeared to be clutching one of their protest signs.

After the man was shoved to the ground, a few people quickly helped him to his feet, and one person can be heard saying, “When you act like that, you act like Donald Trump, so don’t.”

Here’s the video of the incident:

An elderly supporter of the US president is pushed to the ground during anti-Trump protests in London https://t.co/hDO99JOJ8h pic.twitter.com/nSWADhQEto

At least there were a few decent folks in the crowd who helped the man up and sought to be kind and friendly, unlike the monsters who pushed the poor guy down.

We are headed for dangerous territory as a race of beings if we cannot learn to love each other in the broadest, most general sense of the term. Politics are important, crucial, even, for how we manage our societies, but differences in thought should be engaged on the battlefield of ideas, not with bloody fists.

Are we headed for the end of our civilization? If we don’t change directions soon, the answer certainly doesn’t seem to be in the negative. Let’s hope that doesn’t happen and we learn how to properly engage one another’s beliefs with respect and dignity.

This Couple Is Doing More Than Growing Food On Their Farm (Video)
September 29th, 2022 Sons of Liberty Media