VIDEO: Larry Elder Goes Hard After Newsom, Says He ‘Slammed Down The Hopes And Dreams Of Californians’ 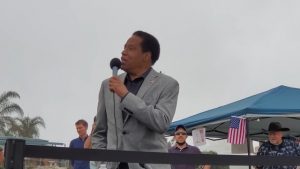 Conservative talk show host Larry Elder dismantled California Gov. Gavin Newsome during a powerful, fiery speech delivered as part of his campaign to take over the governor’s seat now that the recall of Newsom has been made official, ripping the California governor, stating he “slammed down the hopes and dreams of Californians.”

Elder, speaking at Will Rogers State Peach in Pacific Palisades, said, “Where do I start about the job this man has done, Gavin Newsom, in the last two years?”

“Let’s start with COVID,” Elder said. “He slammed down the state of California in a way more severe than any of the other 49 governors. Ignoring science, his own kids enjoying in-person private education, he exempted his own winery from the mandate he was forcing down the throats of everybody else, sitting up there at that French Laundry.”

“I’m not only a lawyer, not only a talk show host, not only a filmmaker, but I also ran a small business for about 14 years and it didn’t go bankrupt,” he continued. “I didn’t liquidate it; I sold it, came back out here. My point is, I have met a payroll and it is hard to run a small business. Most small businesses fail. Those that do succeed are often just payroll to payroll. And this guy slammed down the hopes and dreams of countless Californians who had businesses.”

“We don’t even know how many yet because the bankruptcy courts are now just opening up,” he went on to state. “All we know is that only about half of the jobs have been restored here in California pre-pandemic where the national average is two-thirds. And he’s still paying people not to work.”

“This man is totally devoted to the teachers’ union,” Elder proclaimed. “They did not want to go back to work. They were doing virtual, which is much easier, while getting full-time pay, by the way. Already 80% of the public school kids in California are black and brown. These are the people the Left claims to care about. They’re already behind. 75% of black boys in California cannot read at state levels for proficiency and that was before the pandemic. State level is a low bar. … If I’m lucky enough to become governor, I’m gonna be pushing school choice.”

Elder went on to conclude, “If you care about California, if you care about making sure that the California dream is still here, if you care about people with an eighth grade drop out being able to buy a decent house like my dad did, go to Electelder.com. Let’s get this guy outta here. Final thing: the ballot is real simple. Fifty percent plus one has the vote to get him recalled. If that doesn’t happen, it doesn’t matter how many votes Republicans get. I’m already ahead. I’m not worried about me. I’m worried about making sure 50% plus one to get this guy out. Tell your friends and neighbors there’s a reason for the high crime; there’s a reason for the high homelessness; there’s a reason for the high cost of living, and it doesn’t have to be this way. We’re going to clean this up.”

Newsom, like many other power hungry Democratic governors across this country, exposed himself for what he really is during the pandemic, which is what led to this recall in the first place. Elder makes quite a few good points here, which might bode well for his run for office.